[This is the first post on this story. A very cool follow-up post can be found here.]

When the stories about Catholic women religious and clergy coming under fire from the Vatican for upholding true Christian values*  made the rounds of the news cycle last week, a lot of people were surprised to learn that any Catholic organizations might actually be working for social justice. But there are orders of women religious (aka nuns or sisters) who have been quietly providing real help for the poor and the marginalized in our society (and around the world) - no religious conversion or test required - and they have been doing so for years. Catholic orders of women religious have been working tirelessly for decades with the most disadvantaged people in society, and often in direct - if quiet - defiance of the official stance of the Church hierarchy 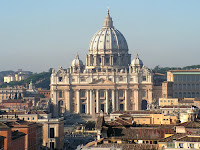 Public antipathy toward the Catholic Church as an institution has grown and is understandable given the heinous crimes and even more heinous denials and cover up that have rocked the church over the past few decades. Catholic politicians like Rick Santorum - whose Catholic fundamentalism is terrifying in its coldly relentless misogyny - has further entrenched the public perception of the Catholic Church as an authoritarian, ultra-conservative, misogynistic organization that seems to be completely forgetting its frequently stated mission to promote social justice.

Sadly, this characterization is undeniably true.  It is a reality that is obvious to objective observers, but which has gone largely unnoticed by parishioners who continue to participate in their traditional communities happily (willfully?) oblivious to the church's recently renewed rightward tilt. One of the things every Catholic knows is that one can visit a Catholic Church almost anywhere in the world and feel at home. The liturgy, the music, the incense - care has always been taken to ensure conformity around the world so that a Catholic community can transcend national borders and national loyalties. It is this conformity and continuity which has lulled many Catholics into a false sense that the Church that they grew up with in the 60's 70's and even the 80's - an emerging progressive and ecumenically-minded Church focused on social justice - has continued to progress. The soothing sameness of Catholic rituals and celebrations served to smooth over and conceal the rightward lurch of the church hierarchy from its rank and file members. People were fooled by the same old-same (wonderful) old appearance of the Church they grew up loving and admiring, while behind that mask, the progressive and socially conscious movement that had at long last been launched by Vatican ll was being dismantled and discarded. 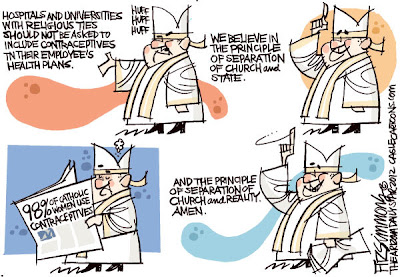 I almost feel like thanking Rick Santorum for bringing the hard-right swerve of the church to the public's attention - and particularly to the attention of sleeping progressive Catholics. While still not quite mainstream Catholicism, this fundamentalist strain of Catholicism has been resurging under the radar for over four decades (the most conservative elements began pushing back even before the Vatican ll council was adjourned), until it has come to dominate the church in a way which is bewildering to many liberal Catholics, and frightening to secular Catholics and non-Catholics. Clearly, though, Catholics are waking up to this reality now and even more clearly, many of them are not happy about it.

On the heels of the contraception debacle, some Catholic clergy are now in hot water for defying the hierarchy and refusing to lobby their parishioners to oppose gay marriage. Polls showed that a whopping 90+% of Catholics use forms of birth control other than the approved "natural family planning" (aka the "rhythm method") and that the vast majority of Catholics support the coverage of contraception by employer insurance, defying the official church position against contraceptive coverage. Perhaps encouraged by the solidly progressive views of a majority of ordinary practicing Catholics, a few priests have begun to refuse to obey their archbishops on other issues where they cannot, in good conscience, agree with the Church.

In Seattle, WA, at least two Catholic priests have refused to gather signatures for a petition for a referendum to ban gay marriage, defying the explicit urging of their Archbishop, Peter Sartain. Among the dissenters were Rev. Michael Ryan of St James Cathedral and Rev. John Whitney, SJ.(Jesuit) of St. Joseph's.

"I have decided that we will not participate in the collecting of signatures in our parish. Doing so would, I believe, prove hurtful and seriously divisive in our community." Rev. Michael Ryan, St. James Cathedral, Seattle.

"The leadership of the church sometimes confronts the world as an enemy of the Spirit. The church needs greater humility and openness." Rev. John Whitney, SJ. St. Joseph Catholic Church, Seattle.

"I am particularly concerned about our youth who may be questioning their own sexual identity and need our support at this time in their lives." Pastoral life coordinator, St. Mary's Church, Seattle.

Rev. Ryan, in particular seems to have risked serious censure by defying the archbishop because he is the pastor at the archbishop's home parish, the archdiocese Cathedral of St. James. But Rev. Whitney, as a Jesuit, has also taken a bold and courageous step:  Jesuits take a specific vow of obedience to the Pope, over and above the usual clerical vows taken by other orders. So far, though, there has not been a reaction from the church like, for example, public censure of the priests.

Interestingly, however, there has been a seemingly out- of-nowhere attack by the Church hierarchy on women in the Church. During the same week that this open act of defiance from priests was occurring in Washington State, news broke that the the Vatican had issued a stunning reprimand of the Leadership Conference of Women Religious (story from NPR) for their stance on social issues.  It may be a coincidence that the Vatican has assigned Archbishop Peter Sartain - yes, Archbishop Sartain of Seattle - to investigate and oversee an overhaul of the nun's association. In keeping with the Bible-based and historically deep-seated misogyny of the Catholic Church, it would appear that the Vatican's outrage over acts of defiance from within the clergy could only be adequately assuaged by chastising and humbling female servants of God. Quelle surprise!

What stance suddenly and so deeply enraged the Vatican, you might ask?  Why, that would be the sisters' long-standing (and publicly expressed) view that social justice should never become a political kickball.  It would be their stance that, as women religious, they have a duty and a right to follow their conscience when serving people in need. It would be their stand that when the requirements for social justice conflict with Catholic doctrine, that perhaps it is the doctrine which should be evaluated and not justice that should be sacrificed.  On the website for their social justice lobby, these sisters regularly expressed views which have only now landed them in a great deal of trouble with the men of cloth.

The sisters' work and their opinions are not actually news to people who work with them, but as so often has been the case over the centuries, the Vatican largely ignored the women religious. Though these women have taken on the lion's share of the Church's work giving aid and comfort to the poor and suffering, they are rarely acknowledged and even more rarely praised by the male hierarchy for their efforts. Yet, in a time of social upheaval, when issues surrounding women's rights have come to the fore, the Vatican is suddenly focusing on the women they have branded "radical feminists" and punishing them for the sins of moral independence and following their social conscience led by their understanding of the teachings of Christ. They have been given notice that they will be taken in hand by Archbishop Sartain, and their entire cooperative of women religious may be completely overhauled to conform to new, stricter Vatican boundaries including - naturally - a male overseer.

The sisters are not taking this harsh censure with complete submission.  These are women who love God and love the Church, but they also believe in social justice and - though their spokeswoman stops just short of saying the Vatican is dead wrong - they have steadfastly defended their position, in spite of the painful sense of rejection and humiliation:

"And it's not about the giving up but it's about the fidelity to the call to be faithful to the Gospel and have that so unseen and to have this edict never mention the Gospel, never mention the responsibility to be God's arms and hands with people who are poor and suffering, the people at the fringes, people who suffer injustice, to have that not at all seen is extremely painful." Sr. Simone Campbell, executive director of  Network.

Allowing that the edict was like "a sock in the stomach," Sr. Simone nevertheless was generous enough to offer an apologia for the Vatican's unexpected slap down:

"When you don't work every day with people who live on the margins of our society, it's much easier to make easy statements about who's right and who's wrong." Sister Simone Campbell.

Sr. Campbell is more generous - and more submissive to unearned male authority and privilege -  than the Vatican or the Pope deserve.  It should not be surprising that the pervasive misogyny in the Catholic Church which would happily see women everywhere subjugated as inferior, less than human beings, extends even to its servants inside the Church, but somehow it still is. The Church has shown its moral bankruptcy in so many ways throughout its history, but has generally had clever enough leadership to hold on to its position of "moral authority" in society, in spite of behavior which has shown it to be the complete opposite in every way.  The one thin beacon of light in the entire decrepit organization has been the outreach work of people like the women religious, and the Vatican seems determined to snuff it out.

I am a little late getting this post off the writing desk. Started this post last week before, you know - crime - but I still wanted to write about it. There was a time in my life when I was determined to join one of the orders now under the umbrella of the LCWR - when I was fired up with enthusiasm to pursue the kind of "mission" that would be unrecognizable to anyone unfortunate enough to be the target of what opportunistic, proselytizing evangelical churches call "missions" today.  "Sisters" were models of strong womanhood; performing important, meaningful work, giving up comforts and conveniences to minister to the poor and sometimes risking their lives to bring nursing, education and other humanitarian aid to people in war-torn places. In an era when strong female role models (not to mention prospects for a life of adventure) were exceedingly rare for girls, these women exemplified one of the few pathways that a girl could embark upon to make a difference in the world outside of domesticity.

The people who made the news last week for displeasing their Church masters represent the kind of Catholicism that almost was. The courageous work of Catholic women religious, and the recent willingness of some Catholic clergy in Washington to challenge the Church hierarchy represent the kind of loving and inclusive Christian stance that I once believed permeated the Catholic Church.  While I have rightly abandoned any romantic delusions of that kind over the past several years, it is a relief to know that my youthful belief that there were sincere people who devoted their lives to the social mission of the Church was not entirely without foundation.

*Not to be confused with the brutally hypocritical True Christian Values™ of the religious right.

Posted by NiftyWriter at 4:43 PM