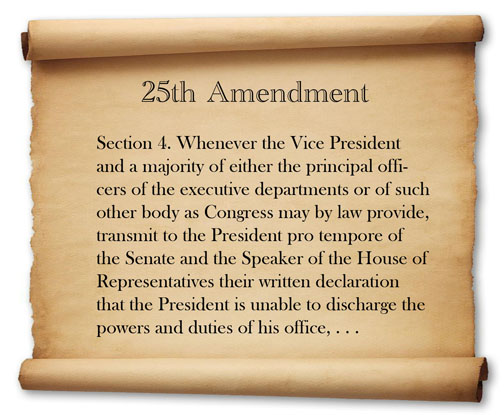 The president's latest flurry of self-incriminating behavior begs the question: what is the remedy for the country when its president is clearly not in control of himself, has committed prima facie illegal actions and none of his so-called advisors, spokespeople and legal representatives seem to have any ability to provide him guidance or indeed to even anticipate his next unhinged act?

There has been talk - almost from the beginning of our current "long national nightmare"- about the possibility of the vice president, senior advisors and congressional leaders invoking the 25th Amendment to remove Trump. But removal by Trump's own people was never really likely, since Trump's character deficits were glaringly apparent even before the election and none of these people seemed inclined to oppose him then, much less remove him.

The reason, the argument goes, is that the Republicans and Trump's inner cabal will continue to back him until they get their own agenda through -- which seems to be to repeal the ACA in order to claw back funds to then finance a huge tax cut to the wealthiest 1%.

Here's the thing, though. In the current chaos, it isn't likely that there will be much legislative activity, and certainly not of the type the Koch brothers et al had in mind when they pinned their expectations on Trump/Pence. In fact, as the dripping of investigative fire crackers increases to a tsunami of bombshells, the likelihood  increases of not only failure to pass the Republican agenda but the collapse of public support for Republican in the House and Senate.

The strangest thing of all is that this could all be avoided by the Republicans! The argument that Trump and only Trump is necessary to get the massive wealth distribution legislation passed just doesn't make sense. Mike Pence is at least as committed to that agenda as his reluctant running mate, having been approved as early as 2014 by the Koch brothers, Grover Norquist and others in the billionaire elite.

They don't need Trump anymore now that his emotionally manipulative, hate-filled and sadly effective campaign has already delivered all three branches of government into their hands. It would be ever so simple to pretend to wake up and -- acting appropriately shocked, dismayed and kept in the dark - deliver the knock out blow to Trump and his band of merciless men. They could point to Trump and his associates as the source of all the nation's ills right now and claim to restore calm and dignity to the office and get government back on track. They could renenergize the Republicans in the House and Senate and answer Paul Ryan's and Mitch McConnell's prayers.

To be continued.
Posted by NiftyWriter at 11:36 AM No comments: