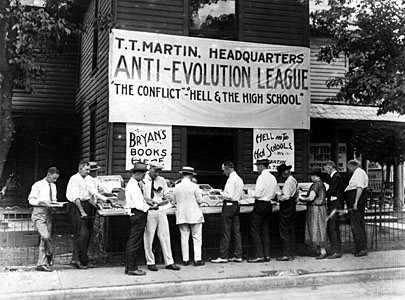 Today, Tennessee's governor, Bill Haslam (R - of course) had a choice:  he could sign or veto the recently passed bill HB368/SB893 - which would encourage teachers to teach creationism in Tennessee classrooms and to teach children the outright lie that there is scientific controversy over established scientific theories such as evolutionary theory or climate change theory. 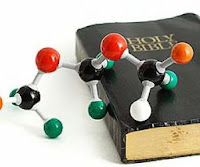 Governor Haslam had done his homework.  His remarks indicate that he clearly understands that the suggestion that there is any scientific debate is false, and that the only "controversy" is religious and political.  Like cowards before him, the Governor chose to allow the law to pass without his signature. In short, he has hedged his bets: he cannot be accused of having signed a bill which will surely cut the promising future of Tennesse's growing reputation as a leader in STEM subjects off at the knees,  but he cannot be accused either of not having kowtowed to the religious right because he has allowed the bill to pass by standing aside and refusing to veto the odious piece of legislation.

Tennessee has the dubious distinction of being the state where the Scopes "Monkey" trial was held back in 1925.  At that time, teacher John Scopes was prosecuted for teaching evolution in a Tennessee school in defiance of a law banning scientific teaching which conflicted with Biblical creationism.  Scopes was found guilty and convicted, but the Tennessee Supreme Court later overturned the conviction.

Gradually, the overwhelming evidence for evolutionary theory convinced a majority of Americans that to prevent schoolchildren from learning this science was tantamount to returning them to the dark ages, and soon educational guidelines routinely included evolutionary theory in science curricula. Ever since that time,  religious proponents of creationism - sworn enemies of the scientific method and especially of evolutionary biology - have been scheming to undermine science and to bring religion roaring back into American public schools.

Tennessee is not the first state to introduce legislation since the 2010 elections which will allow religiously motivated "teaching" of the lie that there is scientific controversy over subjects like global climate change or evolutionary theory.  There is no scientific controversy on these subjects:  the science is solid and there is broad consensus among scientists all around the world that both are well-established, solidly proven scientific theories.  The "controversy" is strictly between religious/political opportunism and the truth.  Religious/political ideologues refuse to accept proven science, not because it is untrue, but because it threatens their own foundational belief systems. 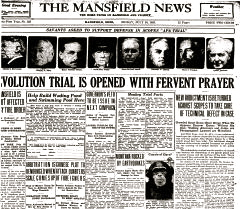 How has Tennessee and states like it come to this sorry pass?  The easy answer is that the rise of the religious right has brought with it incredible pressure on the separation of church and state. But the deeper answer is that moderately religious Americans have enabled the far right to gain this much power.  Religious moderates, hiding behind their "no true Christian" justifications - linking hands with extremists to protect their own religious privilege - have enabled religious extremism to make these frightening inroads into education.

Tennessee had been slowly building a justifiably strong reputation for leadership in Science, Technology, Engineering and Mathematics (STEM disciplines) at secondary and post-secondary schools across the state.  University of Tennessee was ranked highly in STEM disciplines in recent years, thanks to the tireless efforts of science and mathematics teachers and professors.  With this law, the state legislature will undermine all of that hard work, and within a very few years, Tennessee will slide back into the educational backwater where its religiously-backed leadership clearly wants the state - and more importantly, its people - to be.

For the second time today, I want to link to Tombstone da Deadman.  This time, here is his wonderful rap from last summer: "Anti-Science".

Posted by NiftyWriter at 8:27 PM