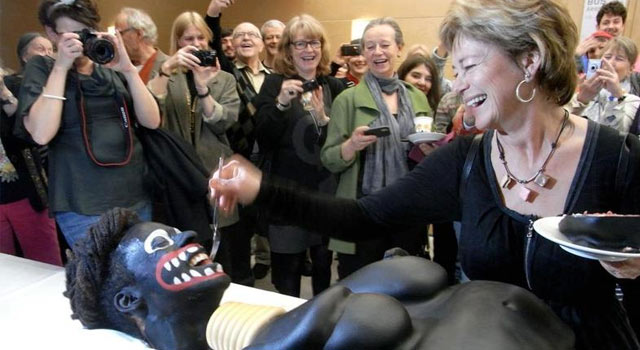 The photo above has been making the rounds today and people are talking about it. Apparently there is controversy! Apparently, reasonable fair-minded people must weigh up these obviously equivalent* viewpoints:

It is a ghastly racist, misogynistic exploitation of the horrific experiences of women of color in societies which practice FGM for the benefit of a callously opportunistic "artist".

As you can see from all the laughter and smiling faces in the photo, the "art" cake was well-recieved in Sweden, at least amongst the delighted throng of white people who attended the event at the Moderna Museet in Stockholm.

According to this story, the "performance art" was part of an installation purporting to be highlighting the issue of female genital mutilation.  I don't doubt that the museum was trying to highlight the issue of FGM, but I think it would be mistake to assume that the museum's - or the artist's - motivation for highlighting this "issue" was to support the women whose lives are impacted by the practice. An alternative motivation, given the repugnant and culturally tone-deaf centerpiece of the opening party, could be that "highlighting the issue of FGM" has been identified as a hot topic likely to generate a great deal of interest and revenue for the artist and/or the museum.

The "art" consisted of a grotesquely caricatured, naked "African" woman's torso with the "head" being that of the artist who was sitting under the display table with his head poking out through a hole in the table placed above the neck of the cake sculpture.  The artist had painted his face in a ghastly "black face" mask, with a wide-mouthed exaggerated grimace complete with cartoonish wide-spaced teeth.

The "performance" element consisted of the "head" of the "woman" screaming in feigned agony as the Swedish Culture Minister - by previously arranged request - picked up a knife and cut the "genitals" on the cake, mimicking ritual female genital mutilation.  Riotous laughter apparently ensued. The Minister enthusiastically ate her piece of cake and even fed the artist a bit of cake, to the delighted amusement of all parties.

What could possibly be wrong with that?

Melissa McEwan had a few suggestions, as did Feministe and these news outlets:  BBC ,  New Statesman, MSNBC.  (Here is the Sarah Baartman story, which some of these articles reference).

Were these people sincerely trying to "highlight" the issue of female genital mutilation in support of the women whose lives are impacted by this horrible practice?  Perhaps they were.  But, if financial and promotional gain were not the real goals behind this mind-bogglingly offensive display, it is hard to think of a worse way to have "failed".

I'm no expert, but it seems to me that instead of a jovial celebration - complete with cannibalistic cake and re-enactments of terrible mutilations - why not simply take a more direct approach?  I don't know, maybe something like this: 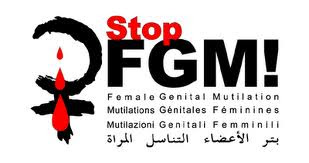 * By "obviously equivalent", I mean: not. remotely. equivalent. Obviously.
Posted by NiftyWriter at 7:49 PM