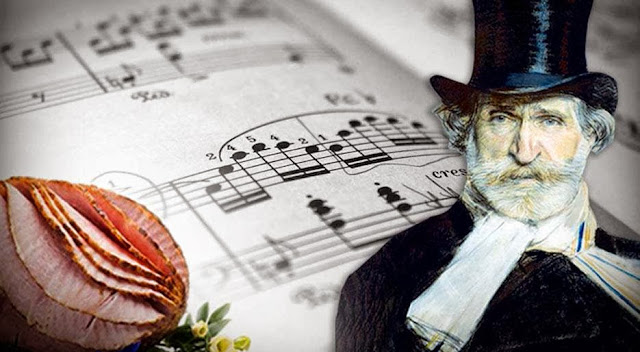 For your Monday Music: a feast for the senses!

Today is the 203rd anniversary of the birth of Italian composer Giuseppe Verdi. Most people know that Verdi was one of the greatest opera composers of all time, but even if Verdi's name doesn't ring a bell (or clang any anvils even), there are numerous hummable Verdi tunes that many people actually do know. They just don't realize that they have been humming Verdi until they hear the tunes performed (in a flash mob, for instance)!

Giuseppe Verdi had a long and eventful life. An agnostic atheist, Verdi managed to escape a lifetime of composing and performing sacred music for the church - the fate of most composers throughout history - and succeeded in earning a comfortable living. He was interested in the complex challenges of the human condition and one of the reasons for his outstanding success was that he broke new ground by exploring deeper ethical and emotional themes. Such work requires a depth of artistic honesty which would have been impossible in a religious context. As his first wife, Margherita, wrote:

“Never, absolutely never, would he [Verdi] settle in Busetto. Having dedicated himself to theatre music, he would succeed in that and not in music for the church.”.

As if that wasn't all cool enough, Verdi was also a man who knew his way around the kitchen! He enjoyed cooking and dining with friends and family and he created many of his own unique recipes.  Here is one that I invite you to try to celebrate the great composer's birthday: 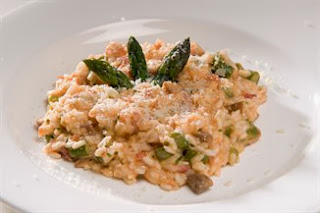 Clean and finely mince the onion. Clean and thinly slice the mushrooms. Clean and blanch the asparagus in salted water: cool them in water and ice. Mince the prosciutto finely. Blanch the tomatoes, peel, seed and cut them into cubes.

In a pot melt ¼ of the butter, add the onion and slowly cook it until soft and golden. Add the rice and toast it for about 1 minute.
Add the broth, 1 ladle at the time, waiting until it has been absorbed before adding the next one.

Stir well, cook for another 2 minutes and add the cream.
When the rice is “al dente” (about 18 minutes), add butter and Parmigiano-Reggiano cheese, then stir well and cover with a lid. Let it rest for 2 minutes and serve. Serves 4.

(This recipe was created by the French chef Henri-Paul Pellapratt (1869-1952), the "father of modern French cooking", who dedicated it to maestro Verdi. via NPR)

Last and best of all - for your listening pleasure, here is a terrific video taken from the Metropolitan Opera HD series featuring the company singing "Va Pensiero" (also known as the "Hebrew Slaves Chorus"). It is hard to believe that this stirring piece - one of Verdi's most well-known and beloved - comes from one of the composer's earliest works. It is from Nabucco, Verdi's first successful opera which catapulted him to the 19th century equivalent of stardom at the age of 34.

"Fly, thought, on wings of gold,
go settle upon the slopes and the﻿ hills
where the sweet airs of our
native soil smell soft and mild!
Greet the banks of the river Jordan
and Zion's tumbled towers.
Oh, my country, so lovely and lost!
Oh remembrance so dear yet unhappy! ..."