Is Blasphemy a Victimless Crime? 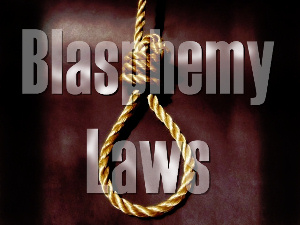 Just the other day, I read an amusing blog post by Mano Singham about an Indian skeptic, Sanal Edamaruku, who challenged a religious guru - who claimed to be able to kill people using only his religious rituals - to do so on TV.  The resulting show was, as Mano said, hilariously "must-see" TV.

Edamaruku followed that debunking of superstition up with another application of healthy skepticism to a false religious claim, when he was invited by a TV station to investigate a Catholic church's claim that it had a miraculous "weeping cross" in front of its premises. Edamaruku simply applied his knowledge of the physical sciences and discovered the rational explanation for the phenomenon:

"Sanal Edamaruku identified the source of the water (a drainage near a washing room) and the mechanism how it reached Jesus feet (capillary action). The local church leaders, present during his investigation, appeared to be displeased."

It seems that due to the church's "displeasure", this story has taken a dark turn.  The Friendly Atheist reports this morning that a warrant has been put out for Mr. Edamaruku's arrest on charges of blasphemy:

"Yesterday (10th April,2012) Sanal received a phone call from a Police official of Juhu Police Station in Mumbai directing him to come to the said police station to face the charges and get arrested. He also said that FIRs have also been filed in Andheri and some other police stations u/s 295 of Indian Penal Code on the allegations of hurting the religious sentiments of a particular community. Mumbai police has announced that they were out to arrest him. It is apprehended that he can be arrested any moment."

Let's think about this. A church was claiming a miraculous phenomenon on its property. A skeptical thinker doubted the truth of the claim and then proved that the claim was false, showing how the phenomenon was actually caused. Outraged by the revelation that their "miracle" was false, the religious leaders appealed to the law to punish the skeptic for telling the truth.

It is hard to believe that this is actually happening anywhere in the world today. Yet, it is happening. Not just in one country, but in dozens of countries dominated by several different religions all around the globe. In first, second and third-world countries - post-modern and pre-modern - blasphemy laws act as a muzzle on free speech when it comes to the free expression of ideas which are not approved by religion.

The threat to Sanal Edamaruku's physical freedom for the crime of laughing when religious superstition was proven false is a chilling example of the oppressive abuse of privilege that religions employ against those who do not share their delusions and who refuse to bow down to their theological authority. Whenever governments (and people) give them the power to do so, religions use blasphemy laws to silence and oppress non-conformists. In many parts of the world, a charge of blasphemy - for actions which religionists claim the discretion to decide - leads to violence and sometimes even death to those accused of the "crime".

Some people say that "blasphemy is a victimless crime".  Of course, they mean that when a person speaks critically about or even disrespects religion, no one is actually harmed by the speech. While this is true in the strictest physical sense, religionists would argue that it is not true of psychological harm.  Blasphemy pains religionists because it challenges their cherished beliefs, which can cause psychological discomfort. Further, blasphemy disturbs a religionist's sense of the proper social order.  Religionists see their religion as the pinnacle of social authority, so a blasphemer outrages them by challenging that authority.

That sort of psychological harm is common in human social interactions, as anyone who was the brunt of a "nyah nyah!" taunt on the playground can attest. In nearly every area of human life, people must cope with their hurt feelings and their sense of injured pride when other people make fun of them - no matter how unjust the ridicule may or may not be.  Only religion is awarded the special status in most cultures which allows them to use the government and the courts to slap lawsuits - or worse - against those with whom they do not agree. 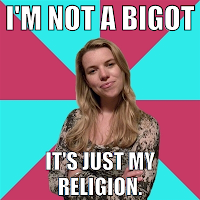 Tellingly, in some countries which have tried to provide legal protection against the very worst kind of ridicule perpetrated on the victims of relentless physical and psychological bullying, the one notable exception to prosecution under the proposed laws is: "sincerely held" religious belief.

The dangerous and undeserved privilege which religion continues to enjoy all over the world is something  against which people who value human dignity and individual freedom must protest, loudly and constantly. Blasphemy may or may not be "victimless", but blasphemy laws enable the kind of religious persecution - and provide legal protection to religiously-motivated violence - which I think is a crime against humanity.