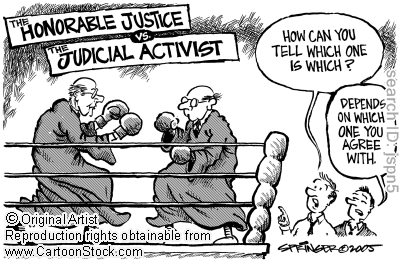 Another in the long line of inexplicably "surprising"  revelations that seem to be coming fast and furious these days:  a Pew Research Council poll shows that public disapproval of the U.S. Supreme Court has tripled during the hearings regarding the Affordable Healthcare Act.  The American people have registered their awareness, once again, that conservative lies criticisms about progressive trickery are more often than not breathtakingly brazen projection.  The "activist liberal judges" we have heard so much about for so many years have failed to materialize in any powerful way, while the United States Supreme Court has been stocked with activist Republican conservatives. Finally, the American people seem to be waking up to this reality. 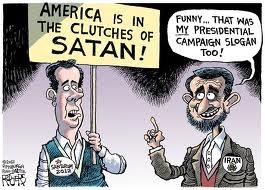 The religious right and the libertarian wing of the Republican party have long accused "the left" of a litany of evils ranging from the myth of the "liberal media" to the incredible accusation that "godless socialists" were bent on destroying this country. For years, the fiction that these "dangers" from the left not only exist but are a threat to all patriotic Americans has been promulgated and, unbelievably, accepted by a majority of conservatives and even some liberals in the USA. Always prominent among these false claims was the suspicious accusation that the left was somehow packing the judicial benches across the land with "activist" judges.

Even while their own churches and business leadership were busy organizing followers to do their bidding in the voting booth, even while powerful conservative backers were financing the establishment of a network of schools and colleges to produce an entire generation of dedicated workers for their pro-religion, anti-social cause, even while libertarian billionaires and billionaire churches planned and financed a scheme to infiltrate every school, every influential profession and every level of government, right-wing American leaders and their followers continued to accuse the left - that scary, elitist, monolithic left - of trying to do the very thing that they were actually doing.

It was the uncertainty and unease felt by the great American middle class following the social and sexual revolution of the 1960's that set the stage for the right wing's greatest opportunity, and its leadership did not waste it. Acting quickly to fill the void that social turmoil often brings to the collective psyche of a population, the religious right shifted its proselytizing and church-planting into high gear. Money was poured into the establishment of Christian schools and "colleges" which popped up all over the country seemingly overnight.  Massive infusions of cash from the coffers of wealthy churches and like-minded wealthy corporations enabled the construction of old-looking, brand new campuses, to give the air of legitimacy to institutions created for the singular purpose of graduating a generation of ideologically-driven businessmen, lawyers, doctors and politicians to fill the leadership positions in the future, theocratic, conservative America of their dreams.

Yet, notwithstanding such a well-financed and determined strategy, the right-wing has found it an uphill battle to beat down and crush the independent American thinker. The traditional wide band of moderate Americans in the center of most policy debates throughout our modern history has been eroded far more slowly than the so-called "moral majority" might have expected given their relentless religious and political proselytizing.  Even at the pinnacle of their power in 2004, the extreme right was only able to grab the top ring of political power with a surprisingly small margin, barely heaved over the finish line by an incumbency that was only made possible by an activist Supreme Court, disturbing voting irregularities and the fear and uncertainty of war.  The fact that - even with a well-funded, carefully-planned, long-term strategy to undermine and further weaken the American social contract using religious indoctrination and inflammatory political propaganda - right-wing conservatives have only managed to thoroughly convert roughly 30% of the population to their extreme ideology says something encouraging about the resilience and independent toughness of the moderate American center. 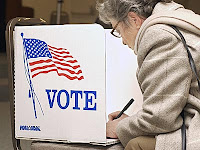 Polls taken last week indicated public support for the Affordable Healthcare Act is split along partisan lines, but that support is rising as the provisions of the Act are beginning to go into effect. A small majority want the bill struck down by the Supreme Court - many because they think the Act goes too far, but some because they object that the Act does not go far enough. This comes in spite of the fact that, when questioned about specific provisions of the law, a much larger majority of respondents actually support many of them!  While the libertarian arm of the Republican propaganda machine (via conservative-dominated media) has seemed to succeed in muddying the waters in the short term, it seems that the American public is beginning to smell a rat. The Pew Research Council poll may be the proverbial canary in the mine: an early indicator that deep in the heart of America, a sense of the fundamental inappropriateness of an unelected body potentially striking down a law which was passed by democratically elected representatives of the people is beginning to reassert itself.

David Frum had an interesting take on the role of the Supreme Court in the election (!) last week on the Daily Beast.  Frum believes that, this time, even a high court stocked with hand-picked conservative ideologues might not bow to partisan pressure to use its unelected power to influence a hugely important matter of public governance - not even to bolster the flagging fortunes of the current crop of Republican primary contenders.  The nine justices may actually perform their constitutionally-defined duty, and nothing more, to the frustration of the conservatives who expect obedience from them,  and to the relief of progressives everywhere.  It is the American people who hold the right to decide in November whether they are satisfied with the work of the current congress.

Out of an apparent "going for broke" recklessness, virtually all of the Republican leadership has openly joined in this intensely partisan and miserably destructive strategy to polarize the American public in order to eke out political victories by small but sufficient margins to retain power. I suppose there may be a cleverly hidden strategy behind this latest spectacle.  What appears to be the disintegration of the GOP might in fact be the birth pangs of yet another well-orchestrated power play, but from where I sit it looks like a nuclear, if temporary, implosion.  They did their worst,  but the extreme right-wing could not completely win over the great American middle. The Pew poll seems to suggest that any attempt by the Supreme Court to interfere politically on behalf of the Republican agenda will be viewed with disapproval by the American public, particularly by progressives and independents.

And that is very good news to me.

* Update: Maureen Dowd's column Men in Black on this topic is a must read.

Posted by NiftyWriter at 7:26 PM