Is There A Christian Word For Fatwa? 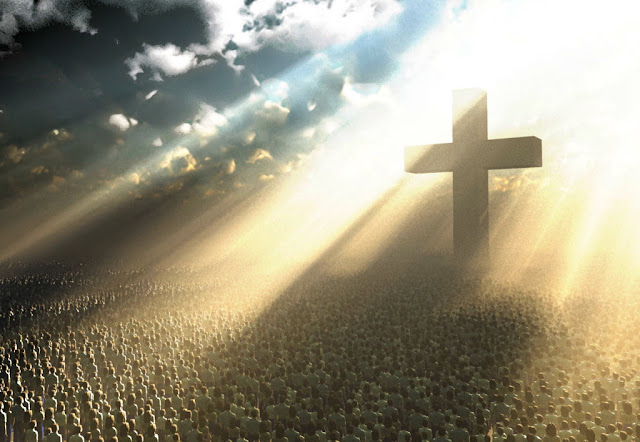 Last week, a Texas judge ruled that publicly praying for harm to be done to another person is perfectly okay.  In the time-honored tradition of giving religion a free pass for behavior - inciting violence - which could be prosecutable as a felony in any other context - especially, say, if people use their freedom of speech to demand justice when a brown person is murdered in cold blood - District Court Judge Martin Hoffman  made a summary judgement against Mikey Weinstein in favor of the former navy chaplain who had publicly posted an imprecatory prayer - Psalm 109, to be precise - for Weinstein's annihilation.

In its crowing report about the lawsuit, the religious website WNDfaith defined "imprecatory prayer" thusly:

"An imprecatory prayer is a prayer asking God to protect the weak and faithful from the strong and wicked."

It is hard to believe that any Christians in the USA could possibly not know that they comprise nearly 80% of the population, while other religious groups account for another 5-6%.  People who do not subscribe to any official religion but still believe in a god make up a further few percentage points. So, the claim that the "faithful" in the military - who are even more numerous relative to the non-religious than those in the general population of the USA - are "weak" is incredibly disingenuous.

Gordon Klingenshmitt was one of nearly 2000 evangelical Christian chaplains who aggressively proselytize to American soldiers using public funds and with virtually no oversight. These chaplains, with the backing of COs, charge soldiers with a mission to proselytize everywhere they are deployed. Weinstein started the MRFF (Military Religious Freedom Foundation) several years ago in an effort to represent the small constituency of soldiers who suffered personal and even professional discrimination - some might even call it officially- sanctioned persecution - as a result of this unconstitutional establishment of the Christian religion within the United States military.

The judge ruled in favor of Klingenschmitt who claimed in his widely published prayer that he was "surrounded by wicked men" who were the "enemies of religious liberty".  In a military overwhelmingly staffed with Christians, where non-Christians are estimated to be outnumbered by nearly 90 to 1, it is difficult to imagine how this former navy chaplain concluded that he was "surrounded" by people who did not share his beliefs, much less how he could believe that he and his fellow Christians were the "weak" victims of the "strong and wicked" MRFF - the group whose raison d'être is to advocate for freedom from religious coercion, don't forget - and whom the Christians greatly outnumbered. It was like Goliath whining that David was looking at him during forced religious worship of Goliath's god.

Though they vastly outnumber their critics, and although they have used pressure and suppression, both through official channels and off the radar, to punish soldiers who protest the suffocating Christian crusading in the American military, people like Klingenschmitt claim to be persecuted for their beliefs. Klingenschmitt denied any ulterior motive, but by invoking Psalm 109 - notorious verses in the Old Testament inciting violence against "enemies" - he sent a message to the fringe elements among his co-religionists that the MRFF, and Weinstein and his family in particular, were legitimate targets for Christian vengeance. Then, he pretended to be the injured party, innocent of any wrongdoing.

How do Christians justify such shockingly blatant lies?

As outrageous as it is that the courts have failed to protect a private citizen from the brazen call for his destruction by a powerful religious leader, this is not the first nor even the most shocking example of how religious privilege in the USA allows the elite leadership of the powerful Christian majority to threaten its enemies with impunity. A recent, and chilling, example of this type of perniciously subversive incitement of violence came to light shortly after the 2008 election of President Barack Obama.

Psalm 109 has been passed around the internet and referenced on bumper stickers, hats and t-shirts ever since shortly after the election of Barack Obama in November 2008.  Christians who sported the hats, t-shirts and bumper stickers disingenuously claimed no harm, no foul. Some columnists - once again in the time-honored tradition of giving religion a free pass on egregiously bad behavior - speculated that the people behind the imprecatory prayer (including pastors and devout bible-studying Christians) may not have been familiar with the full text of the psalm. Considering the emphasis on Bible study in fundamentalist Christianity, this assertion beggars belief.

Pretending that they are not using coded language or political dog whistles is yet another example of the stealth conservative strategy of the religious right, backed by powerful corporate interests in the unholy alliance formed during the Reagan era. Creating social tension to win political power has been the stock in trade of the Christian Coalition for two decades. Establishing plausible deniability in the event of an outbreak of the very violence incited by the coded language is the purpose of using secrecy and coded language. In the words of Ralph Reed, Christian Coalition leader:

"But that's just good strategy. It's like guerrilla warfare. If you reveal your location, all it does is allow your opponent to improve his artillery bearings. It's better to move quietly, with stealth, under cover of night." Continuing, "I want to be invisible. I do guerrilla warfare. I paint my face and travel at night. You don't know it's over until you're in a body bag. You don't know until election night." Ralph Reed, 1992

Feigning innocence of having any wish that actual, physical harm might come to progressives, including the President - and under the protection of the privilege which religion enjoys in this culture - right-wing conservative elites were able to send a message - put out a de facto contract - to the most radical members of its much-vaunted "base". Psalm 109  was a coded reminder of all the Sunday morning exhortations that good Christians were under attack by a wicked, powerful enemy and that if anything should happen to these "enemies", it would be a righteous judgement from God.

Bible-believing Christians are proudly familiar with their Bible verses.  There is little doubt that most Evangelicals were "in on the joke" even as they were protesting that it was just a bit of post-election "fun". Just to be clear, however, here is a fuller passage from Psalm 109 from the Book of David, in the Bible:

8 Let his days be few; and let another take his office.
9 Let his children be fatherless, and his wife a widow.
10 Let his children be continually vagabonds, and beg: let them seek their bread also out of their desolate places.
11 Let the extortioner catch all that he hath; and let the strangers spoil his labour.
12 Let there be none to extend mercy unto him: neither let there be any to favour his fatherless children.
13 Let his posterity be cut off; and in the generation following let their name be blotted out.

Having sent up the alarm, brazenly and in plain sight, while professing innocence of any subtextual motive, the right-wing conservative powerhouses and their political arm - the Republican party - continued to spout patriotic platitudes while they worked tirelessly to undermine the foundations of the Republic for their own political and financial gain. If the strategy is successful, they will need only to sit back and let paranoia and delusions of Christian persecution - well-stoked for over two decades in the nation's megachurches and home-schooling movement - take their natural course as the fabric of society unravels in the face of the constant onslaught of religious and social strife.

The deployment of a Bible verse to commit or incite retaliatory action against one's perceived enemies is the one way that a person in a Christian- dominated culture might be able to get away - sometimes literally - with murder.  That a federal judge threw out the Mikey Weinstein case - and punished him for seeking a legal remedy by making him pay court costs and damages - is an indication that this situation may get worse before it gets better.

One small, significant irony in the situation should not be missed, however.
In declaring that there was no real harm - or potential for harm - suffered by Weinstein as a direct result of the imprecatory prayer for his destruction, the judge was ruling that Klingenschmitt's god does not exist.  If the court believed that the god actually existed - the Biblical god capable of smiting Weinstein - then the prayer would have been as dangerous as a mob contract, and Klingenschmitt would be facing trial for a felony offense.

By ruling that the prayer was irrelevant and caused no harm, the judge threw the weight of a U.S. federal court behind a ruling that God does not exist. Classic.

Digital Cuttlefish at FreeThoughtBlogs wrote an excellent poem summing this up far better, and far more succinctly, than I have done here:

Suppose you ask a hired gun
To wipe somebody out—
Could you be held responsible?
Of that there’s little doubt.
Protect yourself from legal woes
Behind this false façade—
When issuing a mortal threat,
Pretend you’re asking God!
So long as God is impotent
And cannot have His way—
You want your God to smite my ass?
Then go ahead and pray.
If someone overhears you, and
Decides to be God’s sword—
You’re innocent, cos you were only
Talking to the Lord.
Your prayer was posted publicly,
Where anyone could see—
The claim is still “It’s just a talk
Between the Lord and me.”
It’s funny… if there was a God
You’d ask, your soul to spare—
And if you tried out this defense…
You wouldn’t have a prayer.


Update:  Chris Rodda at This Week in Christian Nationalism blogged about the kind of ridiculously offensive mail that Mikey Weinstein regularly receives.  For a sickening glimpse into the mind of the true believer,  check out Chris's birthday post for Mikey Weinstein here.  And a belated Happy Birthday to you, Mikey Weinstein.

Posted by NiftyWriter at 9:37 PM