Turnabout Is Fairplay In Defense Against Terrorism 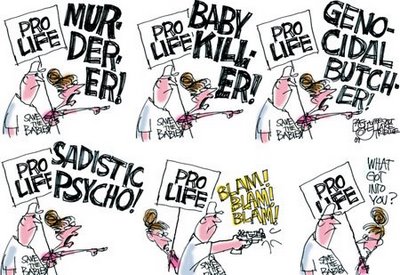 The landlord of a women's reproductive health clinic in Maryland had endured years of harassment by forced-birth protesters. Todd Stave is a firm believer in the Constitutional right to freedom of speech, so over the years he has tolerated what to most people would be a level of harassment and personal abuse that would be intolerable.

Stave has a long history of standing up for women's reproductive rights in his own quiet way. He was only five years old when Roe v Wade was decided, but his family has upheld the right of women to choose what happens to their own bodies from the beginning.  Stave's father and sister were the landlords of the clinic before he was, and he carries on the proud family tradition of supporting the right of women to be treated as fully human - with all the rights that men enjoy over their bodily autonomy.

In late 2010, the forced-birth protesters crossed what even the patient and patriotic Stave considered to be a bridge too far.  They began to appear at his children's' school events, published the names, addresses and contact information of friends and family members, encouraging protesters to harass them, too, and made it clear that if he wasn't frightened by their stalking tactics for himself, then they would up the pressure and threaten his children and his extended family.

Stave asked a few friends to help him keep track of the phone numbers of the telephone stalkers and they began to phone the stalkers back.  In spite of the terrorist tactics that he had been subjected to,  Stave refused to stoop to the level of the forced-birthers.  Instead of uttering threats and calling the stalkers names,  Stave and his friends calmly acknowledged the harassing phone calls and thanked the phone stalkers for their "prayers".

At first, there was just a small circle of friends, but the group grew quickly as people heard about Stave's idea of flipping the forced-birthers tactics back on them - only without the terrorism, the threats and the vitriol.  Eventually, more information was gleaned about the phone and street stalkers, and so the friends of Stave began to drop names and places into their phone calls with pleasant wishes for a good day. This was a direct turnaround of the forced-birth stalkers tactic of threatening the family and friends of pro-choice front liners. Except without the threatening.

Stories like this restore one's faith in humanity, if only a little bit at a time. Well done, Voice of Choice. Bravo, Todd Stave!

Another interesting perspective: It's a Beautiful Wreck's post, Daughter of an Abortion Protester.

Posted by NiftyWriter at 9:40 AM