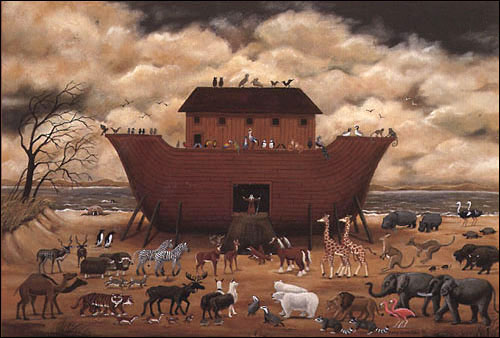 Today in Barmy Bible Study, let's focus on Genesis.  The first book of the Old Testament is full of fantastic stories which are, according to fundamentalists, literally true and which demonstrate the power and might of the all-loving god of the Christians and Jews.

Our text tonight is the Noah's Ark story, helpfully condensed by this online Sunday school resource:

This charming tale remains a perennial children's favorite. After all, what child wouldn't enjoy a story about animals all piled happily in a boat together, "two by two"?  Christians uncritically accept this story of the "nice" man and his ark and all the animals as an example of their god's loving protection.

1. Why did God tell Noah to build an ark?

3. How does the Bible tell us Noah felt when he heard about God's plans for the rest of the people on earth?

About.com provides a helpful synopsis of the story beginning with this line which gets straight to the heart of the matter:

"God saw how great wickedness had become and decided to wipe mankind from the face of the earth." (emphasis mine)

Bible literalists believe that the Noah story is an account of a mass extinction of humanity by their god. The casual way that this global genocide is mentioned in the statement above (and in the Bible story itself) is an example of the way that Christian belief can warp normal human empathy and deaden human awareness of how cruel and immoral mass murder actually is, not to mention the gross injustice of global genocide committed by a violent god angry with a few "sinners".  Christianists will tell you that the Noah story is about their god's merciful and protective nature.  The immorality of the story and of the god character's behavior in it seems to be totally lost on them. 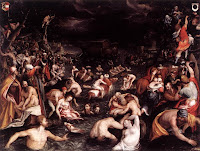 God decided to "wipe" humanity from the face of the earth because of the "great wickedness" he saw.  Even if every adult on the planet was a wicked "sinner", little children and babies did not take part in that "great wickedness", yet the god in the story wiped out all of humanity including innocents.  This is the justice of the all-loving, omniscient and omnipotent Biblical god:  it does not use its omnipotence to change humanity to behave as it demands, thus solving the problem without bloodshed. No, instead it creates a species which is inherently prone to behavior which angers the god, and then the god punishes its "beloved" creatures mercilessly.

Another notable thing about the Noah story is that marked and chilling casual disregard of the writers, main characters (and later of those retelling the story - see Sunday school version above) toward the fate of the rest of humanity.  Not once does Noah (or his family members) express any dismay over the horrible fate about to befall their neighbors. This sociopathy is considered righteous and good in the perverted and upside-down "morality" of Bible-believing Christians. 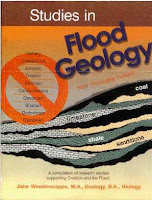 Thankfully, the Noah's story is, of course,  just a myth.  Flood stories abound in the mythologies of countless ancient peoples and the Bible version of it is neither unique nor special in any way.  The only thing that makes the Bible version so well known is that it is the version believed by the dominant cultural group in the western world. Modern geological and archeological research has proven beyond doubt that the Biblical account of the entire world covered in flood waters is false. Nevertheless, young earth creationists persist in peddling pseudo-science called "flood geology" where - in direct opposition to the proper scientific method - religionists posing as scientists look for and interpret "evidence" to fit the Bible narrative. Any evidence that does not fit into the narrative is denied or attributed to scientific (or even Satanic) trickery.

The Noah's Ark story serves two purposes for fundamentalists.  First, it establishes the Christian perspective on genocide, wanton cruelty and gross injustice - turning every normal, socially adaptive and moral human feeling on its head by teaching believers - usually starting in early childhood - that violence and murder are acceptable and righteous in the name of their god.  Second, it forms a narrative for the Christianist attacks on science and education, which is a necessary prerequisite for an authoritarian theocratic society to become established.

Class review:  The Noah's Ark story is summed up quite well by a commenter on the FTB Pharyngula:

"The classic story of glorifying death is the Big Boat event.
They tell that to children because it is so cute. It has a Big Boat and animals and stuff.
It’s a story about the invention of genocide. A Sky Monster kills all humans but 8 and destroys the world. This was supposed to teach people a lesson. It also didn’t work. The Sky Monster had a plan B though, which involved sending himself down to be killed. That didn’t work either. Plan C is to show up someday and kill everyone again.
The Sky Monster’s kludgy fixes usually end up with a lot of dead people."

Posted by NiftyWriter at 8:02 PM