Last night's results have left me too dispirited to write much today. Instead, I will throw out a bunch of links to decent coverage and a few which can help fill in the history which has led to this outcome.

On Wisconsin, The Conventional Wisdom is Mostly Wrong, Jamelle Bouie, The Washington Post. 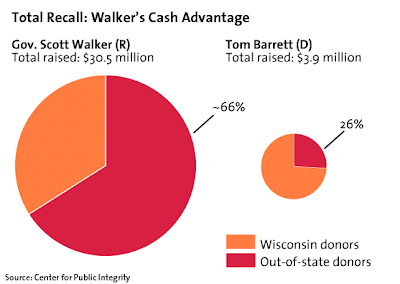 "The result is that today unions represent 12 percent of the work force. “Draw one line on a graph charting the decline in union membership, then superimpose a second line charting the decline in middle-class income share,” writes Noah, “and you will find that the two lines are nearly identical.” Richard Freeman, a Harvard economist, has estimated that the decline of unions explains about 20 percent of the income gap.
This makes perfect sense, of course. Company managements don’t pay workers any more than they have to — look, for instance, at Walmart, one of the most virulently antiunion companies in the country. In their heyday, unions represented a countervailing force that could extract money for its workers that helped keep them in the middle class. Noah notes that a JPMorgan economist calculated that the majority of increased corporate profits between 2000 and 2007 were the result of “reductions in wages and benefits.” That makes sense, too. At the same time labor has been in decline, the power of shareholders has been on the rise."

When Unions are Strong, Americans Enjoy the Fruits of Their Labor, David Morris, Defending The Public Good.  A good, brief history of the labor union movement, and discussion of how the decline of the movement has not only harmed American workers, but there is now a targeted effort being made to erase the history of labor unionism and the kind of gross social, economic and political inequities which made it necessary:

"Republicans are not only targeting labor studies professors.  They are attempting to expunge the already regrettably rare places in the United States where labor history and unions are viewed in a positive light.  The New York Times reports that Maine’s Republican Governor Paul LePage has demanded a 36 foot-wide mural on the Department of Labor’s building be removed.  “The three-year-old mural has 11 panels showing scenes of Maine workers, including colonial-era shoemaking apprentices, lumberjacks, a “Rosie the Riveter” in a shipyard and a 1986 paper mill strike. Taken together, his administration deems these scenes too one-sided in favor of unions.”  Reporter Steven Greenhouse adds, “Mr. LePage has also ordered that the Labor Department’s seven conference rooms be renamed. One is named after César Chávez, the farmworkers’ leader; one after Rose Schneiderman, a leader of the New York Women’s Trade Union League a century ago; and one after Frances Perkins, who became the nation’s first female labor secretary in 1933 and is buried in Maine.” 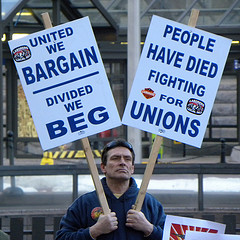 "Many businesses manage to keep unions out by providing their employees with comparable wages and benefits. Even though union wages are still significantly higher, across the board, than non-union wages, many companies are able to keep out unions by providing compensation and benefits (vacations, pensions, health insurance) that compare favorably to those of union shops, thus obviating the need for organizing.
What hurts most in these cases is that the people ("free riders") receiving these comparable wages and benefits think they’re making it on their own, without having to rely on a union. In truth, without the existence of unions, there’s no telling how low base wages for unskilled blue-collar work would fall, with nothing to prop them up except the federal minimum wage."**

How Did Economists Get It So Wrong?  Paul Grugman, The New York Times:

"So here’s what I think economists have to do. First, they have to face up to the inconvenient reality that financial markets fall far short of perfection, that they are subject to extraordinary delusions and the madness of crowds. Second, they have to admit — and this will be very hard for the people who giggled and whispered over Keynes — that Keynesian economics remains the best framework we have for making sense of recessions and depressions. Third, they’ll have to do their best to incorporate the realities of finance into macroeconomics."

"For the past century, political polarization has closely tracked income inequality, and there’s every reason to believe that the relationship is causal. Specifically, money buys power, and the increasing wealth of a tiny minority has effectively bought the allegiance of one of our two major political parties, in the process destroying any prospect for cooperation."

Wisconsin, You Blew It. Greg Laden, (the X Blog), doesn't pull any punches. He is angry:

"A while back, about the time protesters were occupying the Wisconsin State House, I mentioned that while I fully supported the recall of Walker, I also thought the voters of Wisconsin had to take a certain amount of responsibility. They did elect the guy, after all. It was their fault, collectively, that he was in office.
People got mad at me and told me I should say things like that. The people of Wisconsin were victims, they didn’t mean to put an evil Democracy-hating crook in the state house. They needed our support, not our admonition.
But guess what. I was right."