Libby Ann is the blogger who emerged from the Quiverfull movement somehow with her self-esteem intact and a sense of her own full worth as a human being somehow unvanquished. In her current series of posts at Love, Joy, Feminism she discusses the courtship rituals in the Quiverfull movement, particularly as they affect girls.

Read Libby Ann's post about Christian courtship. The pervasive conviction about the necessity for policing female "purity", the enthusiastic acceptance of authority of a father and later the husband over daughters, and the belief that, without male authority figures' constant vigilance young women will descend into moral (sexual) disarray is almost indistinguishable from the attitudes of fundamentalist non-Christian religious groups in the middle east, India, Pakistan and Afghanistan. The acceptance among young women that this controlling behaviour is "protection" is chillingly similar to the ideas in which women in the most oppressive societies on the planet also are inculcated, through fear, oppressive social policies and even legal systems based upon misogynist "holy books".

Although the Quiverfull sect of Christianity is extreme in many ways, their philosophy around courtship and marriage  mirrors the resurgent religious fundamentalism in several other Christian sects. Purity ceremonies, at which adolescent girls are pledged to remain virgins until marriage (under the watchful gaze of their fathers or nearest adult male relative) have become ubiquitous in the evangelical Christian communities which have exploded throughout the USA. 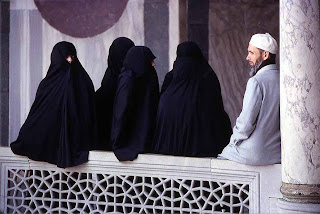 With the current rash of laws put forward by conservative Christians limiting women's rights to bodily autonomy, reproductive freedom and equal human rights, it is impossible to ignore these similarities between the professed desires of the rising fundamentalist Christians in this country and those of their spiritual brethren among the fundamentalist religionists of other regions of the world.

In their contempt for and desire to control women, fundamentalist Christians have clearly indicated what the future USA of their dreams would be like should they succeed in forcing the country into Biblical theocracy.

Posted by NiftyWriter at 6:58 PM