A Lifeboat For Humanity? 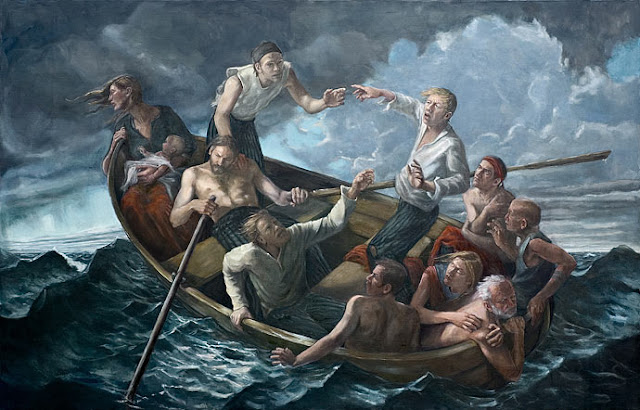 Hank Fox's post Lifeboat of Knowledge, Dinghy of Power will give you much to think about. Like this:

"A lifeboat as in: A conveyance that rescues or gathers something valuable from an area of danger, a place where it will be drowned or sunk, and brings it to safe harbor.
But THE Lifeboat as in: The thing that saved the knowledge and techniques of Science.
Now I can make my argument as: We may have had flashes of science as far back at the third millennium B.C., but we didn’t have The Lifeboat until about 350 years ago."

" So: The Catholic Church’s 2,000-year-old Dinghy of Power goes on. But also, the dinghies of all those younger religions — Islam, and the Mormon Church, and even that mind-control turd Scientology, recently crapped out by SF writer L. Ron Hubbard.
How? Just this: They found an interesting new way to convince people to fall under their sway. Rather than terrorizing them directly – “Obey me or I’ll burn you and your whole family to death in a fire!” (which works only as long as you’re willing to actually follow through and burn some people, and only as long as you live) …
… they discovered you could terrorize people indirectly. Very different from scaring them with direct physical threats, this was scaring them and then posing as the friend who could save them.
Hey, *I* won’t burn you and your whole family to death in a fire, but This Other Guy will. This huge, dangerous guy that you can’t hope to avoid … because he gets you after you die. He can see in the dark, follow you everywhere. He knows everything and he can hear your thoughts. Plus, almost everything you’re doing pisses him off, and you don’t have a chance in Hell of knowing the good things from the bad … without me."

And this, in response to the frequent derailing rebuttal to the "Dark Ages" argument that Wait! Islam produced science and mathematics during the "Dark Ages" (leaving aside for the moment the obvious point that most people refer to them as the "Christian" dark ages for that very reason):

" For much of human history, Knowledge served as a threat to Power. What do you do when individuals rise up and say “Hey, Candy-Titties doesn’t even make sense! Besides, I just discovered that the Earth isn’t the center of the universe!” For it to be a true Dinghy of Power, you have to squash that individual — and his discovery — right away.
So for most of human history, religion (and, yes, superstition) was the choppy sea on which each new discovery attempted to bob and float, but was instead swamped and sunk out of sight.
Doesn’t mean there weren’t fantastic inventions and discoveries in past eras. Does mean they were continually lost or suppressed.
For instance: Kudos for the early intellectual advances of the Arabs — astronomy! mathematics! — and for those of so many other peoples over the earth. But where did they all go? Those discoveries remained virtual secrets as far as larger humanity was concerned. They vanished. Something sank them.
It was only after we cobbled together the Lifeboat of Knowledge that such discoveries had a place of rescue. A place where one piece could be placed on another, and something built with it."

The threat that the resurgence of fundamentalist religion in the world poses to humanity cannot be over-emphasized. Hank's post is a great way for me to start working on posts about education and the suppression of knowledge which have been beating against the wall of my brain for months, but which just seemed too darn huge to get down on paper. Maybe I will try to break them up into smaller bits.  The trouble with the power and reach of religion is...it's power and reach. Religious influence has always been ubiquitous in society, but its power and ability to control the future of humankind has reached renewed ascendency.

I really am convinced that we have reached a point where the level of power that religious fundamentalism holds has achieved critical mass. Either we act now to reduce that power, or we face the dawning of another dark age.

Posted by NiftyWriter at 2:35 PM