A few words from the President which distills in a few minutes just why the Affordable Care Act is so important.

Also, Mano Singham gives an excellent brief review  of some of the reasons why continuing to put up with the current "system" makes no sense at all for the vast majority of Americans. 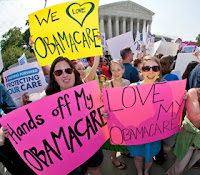 NPR reports that many doctors welcome the Supreme Court ruling that upholds Obamacare,  but, (as expected), they are also reporting that the Roberts grenade - calling the Healthcare provisions a "tax" - will indeed be deployed by Republicans seeking to use the ACA as a weapon against the president and Democratic candidates in their election campaigns.

Memo to Republicans:  That strategy will be a loser. People like and want affordable healthcare!

Speaking of losing strategies, Mitt Romney continues to campaign on the platform that he will repeal Obamacare on Day 1 if he wins the presidential election. No coherent explanation of how this stance squares with his confused stance regarding the embarrassing reality of his own Massachusetts healthcare law - aka Romneycare. Romney has had trouble striking just the right note of criticism for Obamacare without slamming his own effort at better healthcare in Massachusetts (which, incidentally, is highly popular in Massachusetts - people like affordable healthcare!). Romney wants to cash in on the success in Massachusetts while essentially saying that what was brilliant when he did it suddenly morphs into a disaster when President Obama delivers it for the country.

Hmmm. No wonder Mitt Romney is in difficulties. Good is bad, right is wrong, justice is injustice...oh wait. Romney is a religious man. He ought to be well-used to this sort of cognitive dissonance. Perhaps he won't have such a devil of a time with this after all!


Updated to add: This alternet article, Why Justice Roberts' Opinion Could Set Alarming Precedents, by Steven Rosenfeld fleshes out the reasons behind that uneasy feeling many people had yesterday when it was apparent that Chief Justice Roberts - a deeply conservative Bush appointee - had an ulterior motive for siding with the more progressive end of the Judicial bench. The tax/election red meat is only the tip of the iceberg, unfortunately. But, of course.


Also, it is always a good time to provide a link to PNHP (Physicians for a National Health Program).
Posted by NiftyWriter at 5:23 PM