It's that time of the week again - the night we all look forward to: Wednesday Night Barmy Bible Study!
Yes, I know we missed our bi-monthly Bible Study last Wednesday, but sometimes it takes a little time to recover from the horror  properly appreciate the goodness in holy scripture. Let's just get down to the business of wondering at the awesomeness of the Lord, shall we?

In honor of this week's Good News, we will depart a little from the usual Bible class structure of choosing a specific story and discussing it. Let's study a small sampling of the dozens of passages in the Bible wherein God/Yahweh/Jehovah promises his worshippers land, riches and all sort of success, and orders them to utterly destroy anyone and anything which gets in their way.

Deuteronomy 7: 1-6  Driving Out the Nations
1When the Lord your God brings you into the land you are entering to possess and drives out before you many nations—the Hittites, Girgashites, Amorites, Canaanites, Perizzites, Hivites and Jebusites, seven nations larger and stronger than you— 2and when the Lord your God has delivered them over to you and you have defeated them, then you must destroy them totally. Make no treaty with them, and show them no mercy. 3Do not intermarry with them. Do not give your daughters to their sons or take their daughters for your sons, 4for they will turn your sons away from following me to serve other gods, and the Lord’s anger will burn against you and will quickly destroy you. 5This is what you are to do to them: Break down their altars, smash their sacred stones, cut down their Asherah poles and burn their idols in the fire. 6For you are a people holy to the Lord your God. The Lord your God has chosen you out of all the peoples on the face of the earth to be his people, his treasured possession.

Deuteronomy 20: 10-18
10When you march up to attack a city, make its people an offer of peace. 11If they accept and open their gates, all the people in it shall be subject to forced labor and shall work for you. 12If they refuse to make peace and they engage you in battle, lay siege to that city. 13When the Lord your God delivers it into your hand, put to the sword all the men in it. 14As for the women, the children, the livestock and everything else in the city, you may take these as plunder for yourselves. And you may use the plunder the Lord your God gives you from your enemies. 15This is how you are to treat all the cities that are at a distance from you and do not belong to the nations nearby.
16However, in the cities of the nations the Lord your God is giving you as an inheritance, do not leave alive anything that breathes. 17Completely destroy them—the Hittites, Amorites, Canaanites, Perizzites, Hivites and Jebusites—as the Lord your God has commanded you. 18Otherwise, they will teach you to follow all the detestable things they do in worshiping their gods, and you will sin against the Lord your God.

1 Samuel 15: 3
Now go, attack the Amalekites and totally destroy everything that belongs to them. Do not spare them; put to death men and women, children and infants, cattle and sheep, camels and donkeys.'"

Joshua 10: 40-41
40So Joshua subdued the whole region, including the hill country, the Negev, the western foothills and the mountain slopes, together with all their kings. He left no survivors. He totally destroyed all who breathed, just as the Lord, the God of Israel, had commanded. 41Joshua subdued them from Kadesh Barnea to Gaza and from the whole region of Goshen to Gibeon. 42All these kings and their lands Joshua conquered in one campaign, because the Lord, the God of Israel, fought for Israel.

Study Questions for Show Them No Mercy

1. What did Yahweh/Jehovah/God command the Israelites to do?

2. Why did God order them to do this?

3. How does the Bible teach us that the Israelites reacted to these commands and what does their reaction teach us?

Something that believers all know - but which those who do not believe that the Bible is the inerrant, literal word of God fail to understand - is that God chose one small group of people, out of all His creation, to be his especially chosen favorite people.  Just as the Hebrews had chosen Yahweh out of all the gods in the ancient pantheon of the desert region to be their one special God, the Bible says that Yahweh returned the favor. The Bible doesn't say that the other peoples in the region were privy to this unilateral decision by the Hebrews until the Hebrews descended upon them en masse expecting to take over their lands, their possessions and their women, as they believed their god had promised they could do. When the Amalekites, Canaanites, Hittites, Amorites, et al continued to faithfully worship the gods of their ancestors equally to Yahweh - and in some case, with even greater fervor than they had worshipped Yahweh who was to them, after all, only a minor war god in the ancient pantheon - the newly promoted Lord, God of Israel was angered.

So, scripture says that the God of Israel commanded the Israelites to invade these lands, kill all the people and livestock, destroy everything that is sacred to these ill-favored wretches and then claim the lands for themselves. One might think that an all-loving, all-powerful god could be expected to love all of the people He created equally - or at least would be able to hand over the Promised Lands to his Chosen people without harming the other people who did not make the "favored people"  cut (rapture them? uncreate them? surely nothing would be impossible for the omnipotent One?) - but one would be wrong.

The Lord, God of Israel was a jealous god. Just because those other
people had not received the memo that the Hebrews had chosen Yahweh for special One True God™ status, they unwittingly had signed their own death warrants. It was their own fault! Nothing would do but that they be wiped from the face of the earth and the Hebrews were just the people to do it! Amazingly, not only did the Hebrews know in their hearts what God wanted them to do, but they also managed to do every bit of the invading, killing, raping and plundering by themselves, too!  Of course, they knew in their hearts that they had the Lord, God of Israel rooting for them, but they did it all themselves - with His silent, invisible blessing. Praise God!

This is one of the great things about the Bible to which non-believers should really pay more attention. Of all the peoples on the planet, God decided to elevate one group over all the others for no particular reason. That happily blessed group just happens to be Christians!  Well, at first it was the Jews, but now Christians have their own Testament which clearly teaches that there is a New Covenant and in this new deal, Christians are the ones! Well, God is the One and Only, of course (and He is very, very powerful, so don't cross Christians Him if you know what is good for you!), but since He cannot be seen nor heard nor felt nor...well, Christians are His ambassadors on earth and speak for Him - they know in their hearts what God wants, so whatever Christians say, goes. Capice?

Of course, since Christians co-opted the Jewish Bible Old Testament, too, they still politely refer to the Jews as the "chosen people"... for now. Besides, Christians need the cooperation of the Jews in order to take over the Promised Land in time for the second coming of Christ!  Shhh, no, that is not shamelessly using the Jewish people for Christian ends.  God has clearly given the OK to any means necessary to bring about the glorious destiny of His Chosen People - lying, stealing, cheating, murdering - everything is permitted, even ordered, by God within the sacred pages of the Good Book™. When Christians have total dominion over the earth - as they believe that God has promised - then the Jews will have the same chance as everyone else to fall on their knees and accept Jesus Christ as their Lord and Savior. Then, they will truly be the chosen people...because they will be Christians!  You see? The Christian god is an awesome god!  Of course, if they refuse to bow down to the true Chosen people (Christians), well then one only has to read Deuteronomy 20 to know what God commands Christians to do with people who refuse to accept their His holy word, submit humbly to forced labor and hand over everything they love and value.

Except that all of those other religions and all their made-up "sacred scriptures" are simply dead wrong. Christians believe they are commanded by God to take righteous dominion over the world. They believe they are commanded by God to utterly destroy any and all who stand in the way of them in fulfilling this Great Commission. Non-believers will get one chance to accept the Christian dogma and submit to life under Christian rule, but if they refuse to submit, Bible-believing Christians will have no choice but to annihilate them all. Christians always want others to choose life, but if non-believers refuse to bow down to Christian supremacy, then unfortunately yet inescapably the non-believers will have chosen death.


How do we know this?  The Bible tells us so.

* Bonus points for the use of "I came like a thief!" a favorite self-referential passage of dominionist Christians when describing their long-term stealth strategy to infiltrate every avenue of world power. 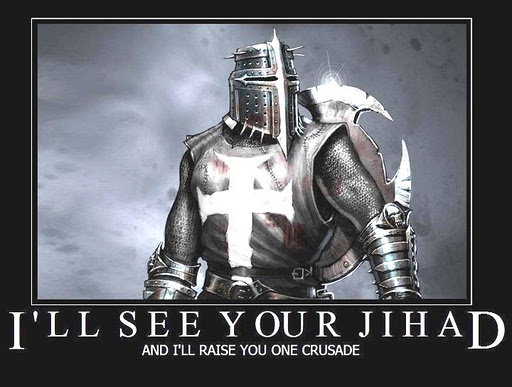