As the 2012 Election draws nearer, efforts to suppress the votes of the people most harmed by bad government policies will be ramped up to a fever pitch. Already in 2011 and 2012, twenty-four (24) laws and executive actions designed to make it more difficult for citizens to vote were passed in seventeen (17) states.  This legislative activity is justified as necessary to deter "widespread voter fraud", a non-existent phenomena for which even determined and prolonged investigation by the Bush administration could not produce evidence. 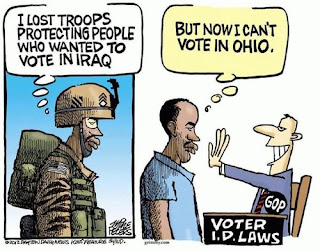 The real effect of these laws will be the disenfranchising of thousands - possibly even millions - of American citizens. Election results are positively correlated with voter turnout.  Reducing the number of people who vote - especially poor people and people of color - has been shown to reduce the per centage of the overall popular vote for the Democratic party, while increasing the number of people who vote in an election increases the Democratic share of the overall popular vote.

This fact has implications for the Republicans.  In close elections, low voter turnout will work to their advantage, while high turnout is likely to swing the election in favor of the Democratic candidates. It is therefore in the interest of the Republican party to discourage voter turnout. And they have been doing their utmost to do just that.

"Ticking off a list of recent accomplishments by the GOP-controlled Legislature, he mentioned the new law forcing voters to show a photo ID at the polls. Said Turzai, with more than a hint of triumph: 'Voter ID, which is gonna allow Governor Romney to win the state of Pennsylvania — done.'"
and
"Prodded by GOP political activists, the Justice Department under Bush conducted an extensive, nationwide, five-year probe of voter fraud — and ended up convicting a grand total of 86 individuals, according to a 2007 New York Times report. Most of the cases involved felons or immigrants who may not have known they were ineligible to vote.
Not one case involved the only kind of fraud that voter ID could theoretically prevent: impersonation of a registered voter by someone else. Pennsylvania and other voter ID states have, in essence, passed laws that will be highly effective in eradicating unicorns."  The GOP's crime against voters, Eugene Robinson, Washington Post. 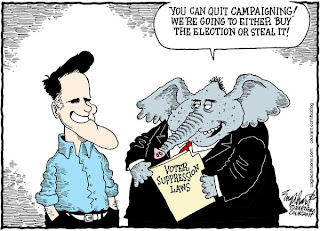 "Four years ago, Democrats expanded American democracy by registering millions of new voters — mostly young people and minorities — and persuading them to show up at the polls. Apparently, the GOP is determined not to let any such thing happen again.
According to the nonpartisan Brennan Center for Justice at New York University, which keeps track of changes in voting laws, 22 statutes and two executive actions aimed at restricting the franchise have been approved in 17 states since the beginning of 2011. By the center’s count, an additional 74 such bills are pending."  A GOP witchhunt for the zombie voter. more excellent work from Eugene Robinson.

"More than two dozen states have some form of ID requirement, and 11 of those passed new rules over the past two years largely at the urging of Republicans who say they want to prevent fraud.
Democrats and voting rights groups fear that ID laws could suppress votes among people who may not typically have a driver's license, and disproportionately affect the elderly, poor and minorities. While the number of votes is a small percentage of the overall total, they have the potential to sway a close election. Remember that the 2000 presidential race was decided by a 537-vote margin in Florida."  Voter ID laws designed to deter fraud may end up blocking thousands of legitimate ballots, Mike Baker, AP (via newser) 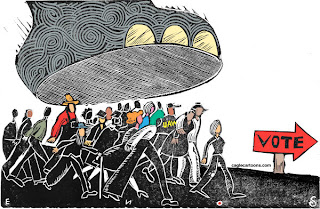 "'The numbers suggest that the legitimate votes rejected by the laws are far more numerous than are the cases of fraud that advocates of the rules say they are trying to prevent," writes reporter Mike Baker. "Thousands more votes could be in jeopardy for this November, when more states with larger populations are looking to have similar rules in place.'
NYU Law School's Brennan Center For Justice has reached a similar conclusion after years of analysis, arguing that some five million potential voters will have difficulty casting their votes in 2012. They say the restrictions will hit young, low-income, minority and disabled voters the hardest." Report: Voter ID laws... Anna Merlan, Dallas Observer.

"Though the story was largely overlooked due to the July 4th holiday, we learned last week that Pennsylvania's voter-ID law is poised to disenfranchise more than 758,000 registered voters this year. In other words, 9.2% of the state's 8.2 million voters will be blocked from participating in their own democracy because Republicans are trying to rig the election." Pulling off an unconscionable crime,  Rachel Maddow, The Maddow Blog.

“As a national organization that closely monitors public affairs in the Latino community, in general, and the Dominican Community, in particular, we have witnessed disturbing allegations of voter suppression and lack of transparency in the 13th Congressional District election,” said Dr. Maria Teresa Montilla, President of the Dominican American National Roundtable (DANR). danr.org, July1, 2012. (help hotline: 1-888-240-1494). 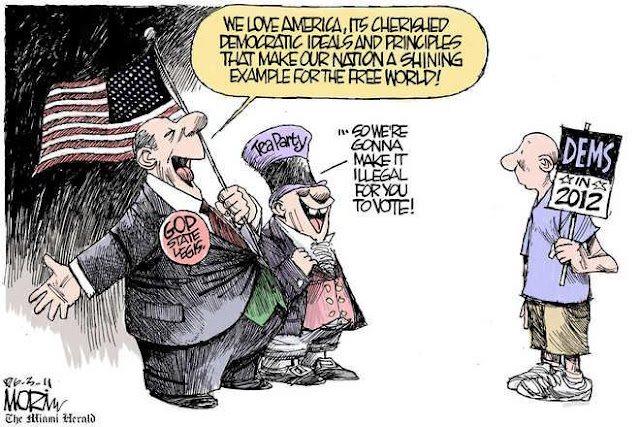 Posted by NiftyWriter at 3:38 PM

Email ThisBlogThis!Share to TwitterShare to FacebookShare to Pinterest
Labels: Election 2012, Republican War on the Republic, Voter Supression, Wake Up America