NPR Follows Up With American Nuns


NPR has followed up on their April story. This morning, Terry Gross interviewed Sr Pat Farrell on NPR's Fresh Air. The interview is enlightening and refreshing. Once again, the vast gulf between the socio-political ambitions of the church's powerful hierarchy and the social justice mission of U.S. women religious comes into focus.

The audio of the interview won't be up on NPR until much later tonight (after its evening rebroadcast in some areas), but from the written recap, here are some interesting quotes:

"The question is, 'Can you be Catholic and have a questioning mind?' That's what we're asking. ... I think one of our deepest hopes is that in the way we manage the balancing beam in the position we're in, if we can make any headways in helping to create a safe and respectful environment where Church leaders along with rank and file members can raise questions openly and search for truth freely, with very complex and swiftly changing issues in our day, that would be our hope. But the climate is not there."

Here, Sr. Pat mentions the dangers I referred to in my Sunday post:

"We're not talking about the risk of ex-communication or leaving the church. That's not our intent. We're talking about the Vatican's dealing with a national organization, not with specific religious congregations or individual religious."

"The one and only underlying option for us is to respond with integrity with however we proceed. That is our absolute bottom line in this. Some of the options would be to just comply with the mandate that's been given to us. Or to say we can't comply with this and see what the Vatican does with that. Or to remove ourselves and form a separate organization."

Sr. Pat has taken a bold and courageous step. She has thrown down the gauntlet, stating the position of the LCWR with a stark honesty and absence of "spin" so rare in society today, especially coming from a religious group. She is saying that the LCWR is willing to step away from the Church, if they are forced to choose between their social conscience and church authority.

But perhaps that earnest honesty should not be so surprising. With grace and humility, Sr. Pat describes what she clearly cherishes as "our gift to the Church".

"We have been, in good faith, raising concerns about some of the church's teachings on sexuality. The problem being that the teaching and interpretation of the faith can't remain static and really needs to be reformulated, rethought in light of the world we live in. And new questions and new realities [need to be addressed] as they arise. And if those issues become points of conflict, it's because Women Religious stand in very close proximity to people at the margins, to people with very painful, difficult situations in their lives. That is our gift to the Church. Our gift to the Church is to be with those who have been made poorer, with those on the margins. Questions there are much less black and white because human realities are much less black and white. That's where we spend our days."

There is so little to admire about religion. The human suffering caused by religion, both directly and indirectly through their political power, is immense. Attacks on science and medical research, denial of global climate change, and oppression of women, LGBT people and minorities has come almost exclusively from the religiously dominated right wing of society. But these women religious have my admiration and my respect.

In their work and in their defiance of the coldly authoritarian hierarchy of the Church, I see a glimmer of the liberal social conscience that was so briefly lighted in the 1960's and I am profoundly moved. Like the liberal Episcopalians/Anglicans, Catholic women religious are discovering that their church is far more concerned with upholding an archaic, unjust and misogynistic conservative social order than with doing good in the world. Those who sincerely wish to follow the lead of the Christ figure in the gospels must fight the very institutions that pretend to represent him on earth. I hope that liberal Christians and closeted atheists are taking note of this irony.

Seriously, this is something to think about. 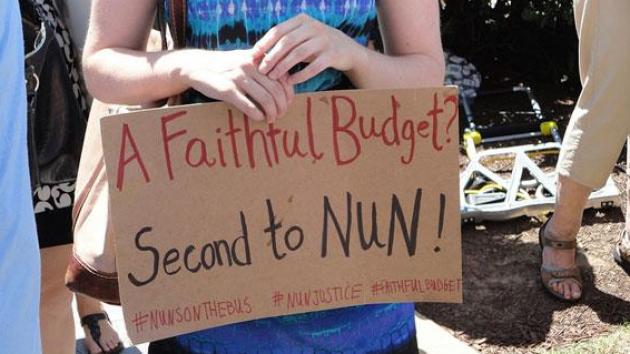 Posted by NiftyWriter at 2:16 PM