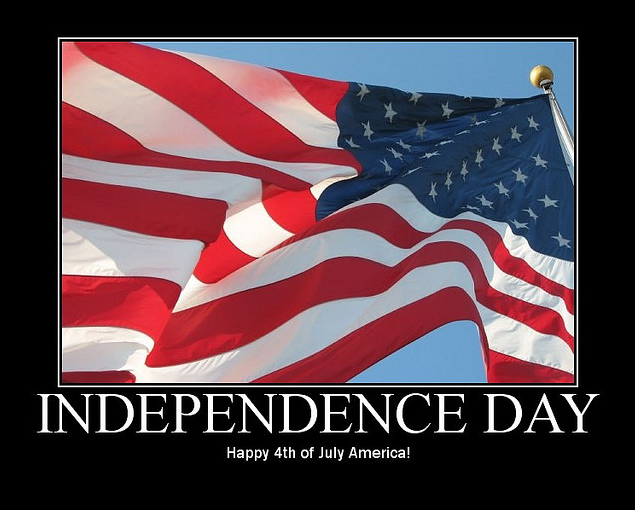 Best wishes to all my American friends on this hot (for most of the country), dry 4th of July holiday.

A few bloggers have posted wonderful essays for today, so I think I will link with brief quotes. If you have a few minutes, they are all worth reading!

"I have always found the inclusion of “the pursuit of happiness” as an inalienable right to be appealing. One does not expect to see such a quaint sentiment in a revolutionary political document, and its presence sheds an interesting and positive light on the minds and aspirations of the people who drafted it." On the pursuit of happiness,  Mano Singham (Theoretical Physicist, professor, blogger).

"Contrary to what many believe, the American Revolution was not about taxes alone and it had nothing at all to do with establishing a Christian nation. As the Declaration so aptly states, it was about being deprived of such things as the benefits of trial by jury, for taking away our charters, abolishing our most valuable laws, and  altering fundamentally the forms government without any input from the people.  It was about the Crown suspending it’s own legislatures and declaring themselves invested with power to legislate in all cases whatsoever. It was about the ability of the Monarchy to wage war on it’s own citizens and, without reservation, to plunder our seas, ravage our coasts, burn our towns, and  destroy the lives of our ancestors without any judicial or legislative regulation." Independence Day is not a religious holiday, nor is the United States a Christian Nation, Al Stefanelli (former Christian pastor, author, blogger and freethought activist).

"Who is the true citizen? The one who talks of abolishing public schools, rails against taxes, toys with the idea of seceding, and yet waves a flag and recites a pledge? Or, the one who believes in social responsibility, sees taxes as her civic duty, and yet questions whether foreign wars are necessary? I’m seriously not sure how the right stole the robe of patriotism. I’m not sure how flag waving became more important than social responsibility. I’m not sure how speaking of seceding is somehow more patriotic than questioning a foreign war." Happy Fourth: On Libertarianism, Citizenship and Social Responsibility,  Libby Anne (thinker, philosopher, blogger - former child of the Quiverfull movement)

"True patriots don't hate the government of the United States. They're proud of it. Generations of Americans have risked their lives to preserve it. They may not like everything it does, and they justifiably worry when special interests gain too much power over it. But true patriots work to improve the U.S. government, not destroy it.
But these days, some Americans loathe the government -- and are doing everything they can to paralyze it, starve it, and make the public so cynical about it that it's no longer capable of doing much of anything. Tea Partiers are out to gut it entirely. Norquist says he wants to shrink it down to a size where it can be "drowned in a bathtub."
When arguing against paying their fair share of taxes, some wealthy Americans claim "it's my money." They forget it's their nation, too. And unless they pay their fair share of taxes, America can't meet the basic needs of our people. True patriotism means paying for America.
So when you hear people talk about "preserving and protecting" the nation, be warned. They may mean securing our nation's borders, not securing our society. Within those borders, each of us is on our own. These people don't want a government that actively works for all our citizens." The True Meaning of Patriotism,  Robert Reich

Dan Fincke from Freethoughtblogs is traveling today but posted links to several of his older posts discussing American Values. Two of my favorites below:

"In other words, the uniqueness and specialness of America is precisely in its audacious claim to be founded specifically on rationally self-evident and non-tradition-specific principles and beliefs. Invocation of the necessity of one religion over another for either the source or justification of distinctively American principles is as antithetical to the true beliefs and values that distinctively characterized America." How Christian Beliefs And Values Are No More Creditable With America’s Founding Than Islamic Ones, Daniel Fincke.

"The belief that god would “Bless America” as His special nation gives credence to the false and dangerous belief that America is infallible and immune to criticism either from within or from without, just like the Christian god. This is entirely delusional to begin with but it reeks of Totalitarianism and Nationalism. Not Patriotism. True patriots challenge and criticize their fellow citizens, their representation and their government. They don't stomp their feet, point fingers and claim fellow citizens are immoral for thinking differently. Patriots do not look another citizen in the eye with contempt for merely suggesting another potential solution to our shared problems. Patriots do not accuse people of treason for disagreeing with them. Patriots do not suggest that their fellow citizens are evil, immoral, in league with Satan. This behavior is reminiscent of every totalitarian regime in history." God_less America,  (Steve, Left Hemispheres)