But It Was Not Terrorism! 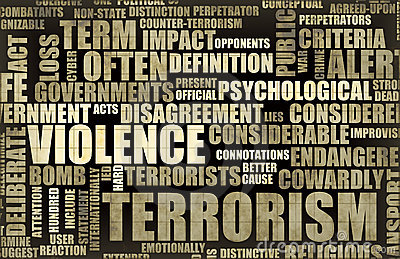 Horrific news from Colorado. Last night, a heavily-armed, masked gunman entered a movie theatre in Aurora, Colorado, threw a smoke bomb into the crowd and began shooting. By the time the murderer was apprehended in the parking lot behind the theatre, there were 12 people dead and more than 50 wounded.

"Aurora Police Chief Dan Oates said there was no evidence of a second gunman, and FBI spokesman Jason Pack said it did not appear the incident was related to terrorism."

This appalling eruption of violence was visited upon a crowd of excited, happy and innocent movie-goers enjoying the thrill of opening night at the movies. The killer had carefully planned and carried out a cold-blooded execution designed to inflict maximum casualties among innocent people. He targeted unsuspecting people who knew nothing of his personal grievances and intentions. People who felt safe enjoying a simple pleasure in life; who were in an ordinary place doing an ordinary thing.

The dictionary definition of "terrorism" is "the systematic use of terror especially as a means of coercion". We usually associate terrorism with a political or ideological agenda; terrorists coerce people to submit to their demands using violence. When a killer turns out to be a white American, his ideological beliefs are never assumed until proven to be whatever they are, and everybody runs from the word terrorist. Even if a political/ideological agenda is proven beyond question - and with far more evidence than that with which instant assumptions of terrorism are made about people of color and non-Christians - it may still be denied.

We don't know yet what the murderer's motive was, but I think what happened in that theatre was terrorism. Call it what it is CNN, even if the officials did not.

As I feared and expected, the Christian right has swooped in with accusations that this tragedy was caused by non-Christians and non-believers.  Call me cynical, but I see a pattern in the constant drumbeat of fear-mongering, lying about and demonizing atheists and non-Christians, encouraging paranoia and violent rhetoric from the right.  One might almost call it "the systematic use of terror especially as a means of coercion".

"You know what really gets me, as a Christian, is to see the ongoing attacks on Judeo-Christian beliefs, and then some senseless crazy act of terror like this takes place," Gohmert said.

Conveniently, "chaplains" were on hand to be "deployed" within hours of the shooting, ensuring a righteous and ideologically correct spin on the tragedy will be immediately reinforced within the shocked and vulnerable community, no matter what the truth actually turns out to be.

"Chaplains from the Billy Graham Evangelistic Association, already in Colorado and New Mexico ministering to victims of the ravaging wildfires, redeployed to Aurora within hours of the shooting. The group's web site was uploaded with evangelical advice on "spiritual survival" in tragedy."