But, Climate Change Denial Is Better For Business!

Another wave of wingnut stupidity from the Know-nothing/Do-nothing brigade:

"Sometimes, you just can’t make this stuff up.  It’s really embarrassing for me to write this, but the legislature of my native North Carolina has made it illegal for public officials to consider current rates of sea level rise as they plan for the future."  Relax Outer Banks: NC legislature outlaws sea level rise, Kaid Benfield, NRDC (Natural Resources Defense Council Staff Blog).

Although scientific evidence increasingly shows that fossil fuel consumption has caused the climate to change rapidly, the issue has grown so politicized that skepticism of the broad scientific consensus has seeped into classrooms.
Texas and Louisiana have introduced education standards that require educators to teach climate change denial as a valid scientific position. South Dakota and Utah passed resolutions denying climate change. Tennessee and Oklahoma also have introduced legislation to give climate change skeptics a place in the classroom.
In May, a school board in Los Alamitos, Calif., passed a measure, later rescinded, identifying climate science as a controversial topic that required special instructional oversight.  Climate change skepticism seeps into science classrooms,  Neela Banerjee, Washington Bureau, LA Times.

A survey of U.S. high school biology teachers published in the journal Science in 2011 that found about 13 percent of those surveyed "explicitly advocate creationism or intelligent design by spending at least one hour of class time presenting it in a positive light."
The survey found only about 28 percent consistently followed National Research Council recommendations for introducing evidence that evolution occurred. 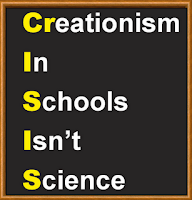 The rest, about 60 percent, avoided controversy by limiting evolution instruction to molecular biology, telling students they need not believe in evolution to score well on tests, or exposing students to all positions, scientific and otherwise, to let them make up their own minds, the article said.  Tennessee teacher law could boost creationism, climate change denial, Deborah Zabarenko, Chicago Tribune.

Here is a link to the cached article in Science Daily which discusses the study findings mentioned in the quote above:  High school biology teachers reluctant to endorse evolution, Science Daily, January 2011.

This next article is frankly too depressing to quote. Just go read it and read the sources Ms. Boxall refers to in the article: Earth May be near tipping point, Bettina Boxall, LA Times.

I'll leave it to the finest skeptical wordsmith I know to sum up the last article above.  In hir own inimitable style, the Digital Cuttlefish describes our current situation as the industrial and religious agendas dovetail with human apathy and gullibility, creating the conditions for a perfect storm of global crisis for our children and grandchildren in verse:

Digital Cuttlefish, We Are All So Screwed

Posted by NiftyWriter at 2:57 PM