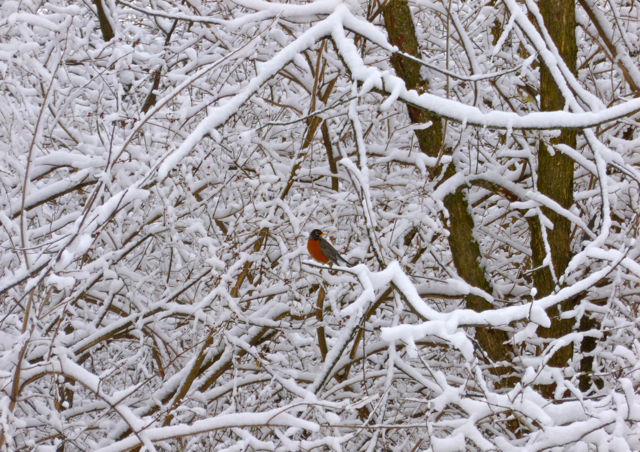 We've enjoyed a record-breaking mild winter here in Chicagoland with temperatures well above average all season long and hardly any snow.   With no snow on the ground,  people have been looking hopefully for green shoots and other signs of an early spring on the bare brown earth.

Over the past few days I was thrilled to hear the distinctive "Cheer up!" which is the song of the American Robin*.  I had not actually spotted a little harbinger of springtime, but I know that song when I hear it.

I figured I would spot one soon enough, but I didn't expect it to be like this!

A roaring March lion blew in a few inches of snow the other day, catching this little fellow and a bunch of his equally red-breasted friends by surprise.  There was a lot of flustered, fluttery activity outside my window a little while ago.  When I realized what it was, I grabbed my camera, ran out into the snow in my slippers and snapped a picture.

That is the kind of dedication you won't find in the average blog.

* I think it is most unfortunate that the lovely robin redbreast has been assigned the unflattering scientific name Turdus migratorius.  Come on scientists, can't you do better than this?  They are the harbingers of springtime,  for pete's sake!

Posted by NiftyWriter at 8:02 AM