Well, Election Day is finally here. The lines may be long. The pressure may be on you to walk away from the polling place. Please do not take the easier road today. Your country needs you. Get out and vote. Tell your family and friends to vote. The country is at a serious crossroads right now - do you want to turn back the clock 50 or more years economically, socially and politically? Or do you want to keep moving forward? 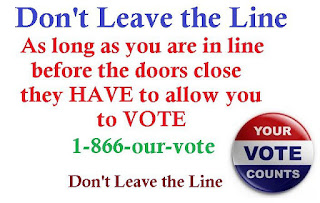 There have been worrying reports for weeks about ramped up efforts to suppress the vote, especially in the battleground states of Ohio, Florida, Colorado, Virginia, Wisconsin and Nevada.  Please stay strong, people! Do not let voter intimidation rob you of your constitutional rights. Do not let secret, well-funded groups succeed in suppressing the vote to steal this election. The United States is a free Republic and it will stay that way because everyday American heroes will insist upon it.

Know your rights and be prepared. There may be long lines, irritable people, problems with voting machines and "observers" who may challenge your right to be there. Do not accept the word of a stranger on a polling place line; do not let an "observer" convince you that you should not vote today! These operatives have been well-trained to scare voters away from the polls. Do not let them do this to you. Do not let them do this to America.

Our Vote:  "Election Protection is working 365 days to advance and defend your right to vote, but you also need to be fully equipped with information and resources to help you cast a ballot on Election Day."

Know your rights!  State-specific voter checklists Use the checklist as a resource for information about your right to vote and what you need to do before heading to the polls on Election Day. 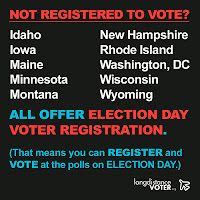 VotoLatino, Get the facts on latino voter suppression, and information about voting.

If you have a few minutes before you go to the polls - or even while waiting in a long line (print to read!), please read the passionate and heartfelt essay linked below. Millions of young people in America have been recruited to serve the interests of a nihilistic and profoundly anti-American ideology through early religious indoctrination and college radicalization . Fighting your way out of that maze of conflicting moral problems is extremely difficult - the strategists behind it deliberately made it that way - but young Americans are stronger and smarter than that.

I am ashamed because I accepted into my heart and head a system of thought I now believe to be, to borrow a term from my old friend Ayn Rand, anti-life: that government should only exist to make it easy for businesses to do business, the idea that it is our civic duty to have no civic duty. I no longer believe that the way to make things better for everyone is to let people with money do whatever they want, whenever they want. I feel I’ve earned the crap out of this belief, given that I used to believe precisely the opposite, and I’ve taken a long journey to the side I stand on now.

And I urge you, before you dismiss me as a long-haired Hollywood goofball liberal, to read on, and to listen to me in every bit the earnest that I am writing to you.  Please don’t pull the dismissive ripcord in your mind, the one labeled “You’re just saying that because you’re biased, etc…” that all of us use every day to reject the idea that someone who disagrees with us may have a point. This ripcord is cynicism, plain and simple, and it mars political discourse and if we continue to pull it every time someone starts to say something that doesn’t jibe with what we already think, life on this planet will soon be quite literally impossible.

I completely understand the appeal of being an intelligent young conservative. When you’ve spent your entire academic career in gifted-and-talented programs, constantly being made an exception of, there’s something really appealing in imagining the grown-up world as a perfect arena of achievement where the talented and strong triumph, because they’re better than everybody else and they work harder, and everybody else watches from the sidelines or works the concessions stand, or worse.

And I still don’t believe the smart and capable and hard-working should have a whole lot of roadblocks to doing what they want and need to do, as long as they’re not infringing on the rights and the health of others.

What I’ve learned in my brief time in the real world is, there aren’t a whole lot of impediments to smart, capable, hard-working people doing what it is they want and need to do. Not governmental ones, anyway. But the threat of Big Government inhibiting these high achievers from raising all our boats with their tide of good ideas and prosperity is often used to make life very, very hard for lots of other people, including, yes, a lot of the smart, the capable, and the hard-working. Harder than it needs to be, given our relative affluence as a society.

By now, in these last remaining days before the election of 2012, we have learned enough about the beliefs of the Republican presidential candidate to see them as a worldview all its own – a kind of creed that explains Mitt Romney. Those who say he has no principles are selling him short.

Despite its contradictions and ellipses, Romneyism has an internal coherence. It is different from conservatism, because it does not intend to conserve or protect any particular institutions or values. It is also distinct from  Republicanism, in that it is not rooted in traditional small-town American values, nationalism, or states’ rights.

Posted by NiftyWriter at 9:28 AM