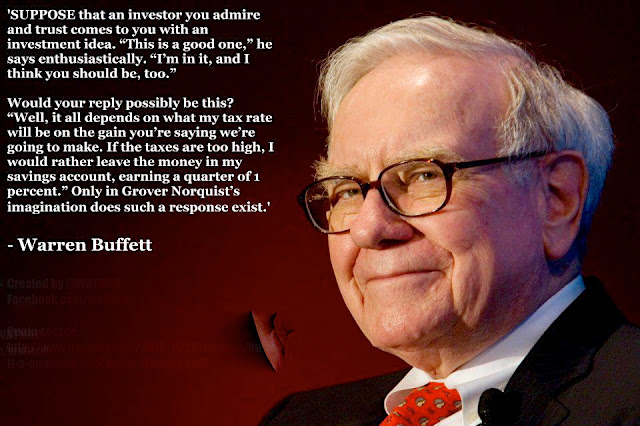 Warren Buffet rocks. I'm just going to come right out and say that. In the spring, the New York Times' Dealbook editor, Andrew Ross Sorkin, reported that when a shareholder complained to Buffet that his 84 year-old father refused to invest in Berkshire because of Buffet's publicly stated position on taxes:

"Mr. Buffett replied with a zinger: “Sounds like your father should buy stock in Fox.”"

This week, Mr. Buffet's Op Ed piece in the New York Times expands on the topic of rational tax policy. In a few short paragraphs, he recaps the history of how the much higher tax rates of the past paved the way for economic expansion and a prosperous, growing middle class. As those tax rates were gradually reduced, financial inequality in American society began to grow again. With ever more drastic cuts to the tax rates on the wealthiest Americans since the Reagan administration, the gulf between rich and poor has rapidly widened, while manufacturing and other middle class jobs have dried up resulting in a steadily shrinking middle class.

Between 1951 and 1954, when the capital gains rate was 25 percent and marginal rates on dividends reached 91 percent in extreme cases, I sold securities and did pretty well. In the years from 1956 to 1969, the top marginal rate fell modestly, but was still a lofty 70 percent — and the tax rate on capital gains inched up to 27.5 percent. I was managing funds for investors then. Never did anyone mention taxes as a reason to forgo an investment opportunity that I offered.

Under those burdensome rates, moreover, both employment and the gross domestic product (a measure of the nation’s economic output) increased at a rapid clip. The middle class and the rich alike gained ground.

So let’s forget about the rich and ultrarich going on strike and stuffing their ample funds under their mattresses if — gasp — capital gains rates and ordinary income rates are increased. The ultrarich, including me, will forever pursue investment opportunities.
Warren E. Buffet, A Minimum Tax for the Wealthy, New York Times, November 25, 2012.

Warren Buffet has earned popular respect for more than just his quick wit and feisty defense of his principles. Although he is one of the richest and most successful businessmen in the world, Buffet broke ranks with most of the super rich when he said that he did not think that rich people like himself should be paying less in taxes than the middle class. That pronouncement probably cost him a few friends (though probably not business followers) in the rarefied world of the super wealthy.

The reality is that the current micro-fraction of superrich Americans have accumulated a rapidly growing portion of the wealth pie due to their ability to influence legislation to favor their own interests. Warren Buffet seems to have reached a point in his life where personal ambition and business pragmatism no longer justify turning a blind eye to or remaning silent about immoral wealth inequity and increasing plutocratic control of government and the economy.

The Oracle of Omaha went on the record saying that he is uncomfortable about the fact that his secretary - earning considerably less than $100,000 per year - pays a higher tax rate than the Berkshire Hathaway legend himself pays. That was the anecdote cited by President Obama when he put forward his suggestion for a more fair and balanced tax structure - featuring a minimum 30% tax rate on high incomes - aptly named the Buffet Rule.

On April 16, the Buffet Rule was killed by the Senate, thanks to determined Republican obstructionism.  Later that same week, the Republicans planned to vote on a bill handing out yet another 20% deduction on business income. That bill was passed by the Republican-controlled House on April 19. It has not yet been passed by the Senate. While braying about class warfare - by which they mean envy of the productive rich by the shiftless, lazy not-rich -  the Republicans managed once again to champion tax advantages for the wealthiest Americans, while heaping more of the tax burden onto the middle class and the poor.

How ironic it is that while the incredibly wealthy Warren Buffet speaks out in defense of the 99.9%, Republicans in Congress appear to live in an alternate universe where the extremely wealthy never use roads or shipping infrastructure to move their goods across the country and around the world. They appear to have missed completely the fact that workers - many who have endured wage freezes or at best wage increases which have barely kept up with the cost of living: inflated health care costs, rents and mortgages, college tuitions and gas prices - enable the production of goods and services which provide the enormous profits that line the pockets of the wealthiest Americans. (Yes, Paul Ryan, there are makers and takers: the workers - too few of them unionized - make the goods and services while the plutocrat elites take the profits).

Republicans appear to have been asleep while banks, mortgage companies and brokerage houses played fast and loose with the economy, enriching the tiniest sliver of the population while the other 95% or more fell farther and farther behind in the income gap. When the housing and stock market bubbles burst, most of this same extremely wealthy and privileged few escaped prosecution - and escaped serious financial damage - and were soon recouping their losses from the crash by buying up stocks in more companies at extremely discounted post-crash prices. Meanwhile, the middle class and the poor ate the cost of the crash - losing jobs, losing homes, losing livelihoods - and still kept paying taxes, on income, on goods and on services.

Yes, Paul Ryan, there are makers and takers: the workers - too few of them unionized - make the goods and services while the plutocrat elites take the profits.

It's also interesting that Warren Buffet isn't the first person to depart from the received "wisdom" of his overwhelmingly conservative peer group. Theodore Roosevelt, the father of the progressive Republican movement, had to break away from the Republican party as his goals for social justice became increasingly at odds with the plutocratic ambitions of party hardliners. Similarly, though he courted the support and votes of conservative hardliners, Ronald Reagan - the demi-god of the right wing - expressed views which today would see him kicked unceremoniously to the curb by the party "base".

Last fall, Think Progress published a great article comparing the class warrior presidents - Reagan and Obama - with supporting video. As the White House and Congress continue negotiations to avoid the so-called "fiscal cliff" at the end of the year, it is interesting to consider that the current party of No has its roots in progressive social justice, ideals that were apparently shared by their idol, Ronald Reagan, even as his ambition led him to an unholy alliance with the right wing fringes of his party thus enshrining himself as the father of the current economic nightmare.

Once more, history offers compelling evidence of just how fanatical and extreme the conservative movement has become in this country. Jay Bookman, Atlantic Journal-Constitution, October 3, 2011.

Some days, the irony meter spins way up on bust.