Pat Robertson Does It Again!!


Stop the presses! For the second time this year, Pat Robertson has actually expressed a rational thought! First, it was "legalize marijuana" and now...LOOK!...Pat has declared that Young Earth Creationism is false!

Yes, you read that correctly, Pat Robertson went on television and admitted to his viewers that millions of fundamentalist Christians have been lied to by the perpetrators of the YEC dogma, among them the "Answers" in Genesis fabulist and founder of the Creation "Museum", Ken Ham. Answers in Genesis was created to provide apologia for young earth creationism, and in the USA Ken Ham was their man. Thousands of homeschooling networks have used Answers in Genesis curriculum materials to deprive their students of any coherent understanding of the reality of the age of the earth, the evolution of life or any other reality-based scientific knowledge.

The Creation "Museum" is part of the even broader outreach of that movement's determination to indoctrinate youngsters with lies and mythology. Ham lobbied for (and received!) publicly-funded financial incentives to construct a glorified indoor theme park which tells the "story" of life on earth according to Biblical mythology. By gaining access to some public funding and calling the religious edifice a "museum", Ham and his disciples were able to misrepresent their religious agenda as a mainstream "educational" institution just like bona fide museums and libraries. The targeted groups can venture outside their religious "schooling" bubbles and find their carefully-inculcated worldview confirmed in a "public place". It is all part of the drive to paint a veneer of legitimacy over the fabrications, mythology and straight-up lies that the Young Earth Creationists present to their students in place of real science and reality-based history. (The other part of that strategy is to inject YEC into public schools by claiming that it ought to be taught alongside real science and history, thus giving it a false equivalency to reality-based instruction).

Yet, even in the echo chamber that is the fundamentalist religious schooling movement, young people still claw their way out of the suffocating fear of eternal damnation to question the validity of a belief system which denies the reality right before their very eyes every day. In response to a viewer who was worried about her family's ticket to heaven in the afterlife because they found the Biblical "explanation" (or lack of it) for the existence of dinosaurs unconvincing, Robertson had this to say:

Look, I know that people will probably try to lynch me when I say this, but Bishop [James] Ussher wasn't inspired by the Lord when he said that it all took 6,000 years. It just didn't. You go back in time, you've got radiocarbon dating. You got all these things and you've got the carcasses of dinosaurs frozen in time out in the Dakotas.

They're out there. So, there was a time when these giant reptiles were on the Earth and it was before the time of the Bible. So, don't try and cover it up and make like everything was 6,000 years. That's not the Bible.

If you fight science, you're going to lose your children, and I believe in telling it the way it was.

Of course, Pat Robertson did not always believe in telling it the way it was (or, for that matter, telling the truth at all). But, things are different, now. It seems that the wily ol' fox has twigged to the fact that young people sometimes resist being indoctrinated with lies. That 'god-created 6000 year-old earth, end times are a'nearing' alternate universe that fundamentalist Christians have been forcing on their young is not just a terrible, manipulative lie, but it is a terrible manipulative lie that they can't sustain because the facts just won't go away.

Naturally, Pat tries to spin it as a positive for fundamentalist Bible-based faith ("That's not the Bible"! Any flaws in Christian Reconstructionism have been human errors, not flaws in the actual theology!), but the jig is up. Religious extremists simply cannot cover up the overwhelming evidence that their doctrines are false. The younger generations are on to them. While it is unlikely that we will soon hear confessions that extremist religious teachings were misleading at best and harmful at worst, and their favored position in society and influence in government policy has been detrimental to the country, the public confirmation by a former proponent that young earth creationism is dead wrong is at least a step in the right direction. For over a decade, creationist nonsense has been used to eviscerate school science curricula thus undermining our scientific and technological progress. It may take another decade to undo the damage, if indeed we still have that much time before the rest of the world sprints ahead of us in the global race for scientific and technological innovation.

Isn't it marvelous how quickly base self-interest will induce even hardliner right-wing extremists to soften their irrational stances when it just isn't winning them elections anymore? Rabidly fundamentalist preachers doing a U-turn on the anti-science highway, GOP representatives decrying the anti-immigration hard line, and wingnut radio hosts giving themselves whiplash spinning their positions on immigration policy, reproductive rights and economic inequality: Change is in the air! Republicans are doing a hasty, awkward two-step which they are trying to sell as a modern dance with intentionally surprising twists and turns. Their extreme positions were an illusion! In fact, they are for what they only seemed to be against. Or at least, some of them hope to conceal their true agenda better in the future. Meanwhile, others believe that their approach was not extremely conservative enough.

But batty Patty knows that doubling down on a losing strategy simply won't pay doesn't make sense. He has admitted that young earth creationism is a lie, because he understands that - even with homeschooling, burying "sheltering" young minds, and determined miseducation of children (often using public funds) - not even the hugely powerful evangelical Christian machine can suppress reality-based knowledge and cover up the truth forever.

Next thing you know, old Pat will be arguing in favor of right-wing acceptance of evolution, global climate change and women's equality!

"The feminist agenda is not about equal rights for women. It is about a socialist, anti-family, political movement that encourages women to leave their husbands, kill their children, practice witchcraft, destroy capitalism and become lesbians." Pat Robertson

Update: Before I even had this blog post finished (yes, it's taken me two days - I have the flu, so sue me), Ken Ham has taken the time to blast Pat Robertson over his remarks. Quelle surprise!

Head-shaking and accusations of disloyalty to the authority of ???:
"Not only do we have to work hard to not let our kids be led astray by the anti-God teaching of the secularists, we have to work hard to not let them be led astray by compromising church leaders like Pat Robertson," Ham said Wednesday in a post on Facebook.
"Pat Robertson gives more fodder to the secularists. We don't need enemies from without the church when we have such destructive teaching within the church," Ham added in the statement shared with those following his non-profit Christian apologetics ministry on Facebook.
...And...like clockwork...the inevitable threats and fear-mongering:

"I still shake my head at the number of church leaders who want to appease the secularists and accept their anti-God religion of millions of years and even molecules to man evolution," Ham wrote. "Such leaders (including Pat Robertson) have a lot to answer to the Lord for one day. Such leaders are guilty of putting stumbling blocks in the way of kids and adults in regards to believing God's Word and the gospel." 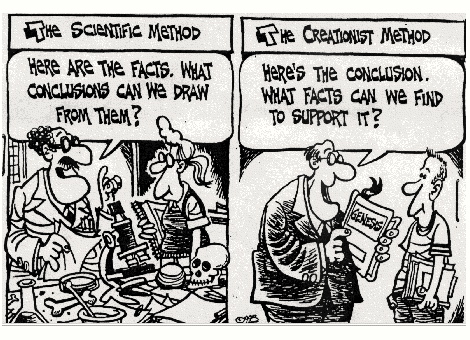 Posted by NiftyWriter at 5:44 PM