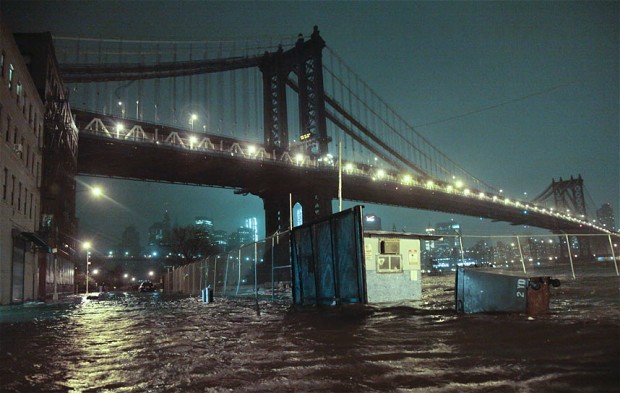 “President Obama promised to begin to slow the rise of the oceans (13 second pause)
And to heal the planet (3 second pause)
My promise is to help you and your family.”

Watch it carefully because the delivery is a meticulously choreographed mime. Romney breaks his gaze from the audience, and does a little eyes to heaven, lip biting act that is all about communicating clearly to the audience that this is not a podium style rhetorical pause ( such as “think not what your country can do for you…….) but a Jack Benny stand up comedy pause. The body language suggests that he is like a long suffering but resigned parent holding in his real views about the President’s ‘stupidity’.  Watch it and see what I mean.
George Marshall, Climate Change Denial, August 31, 2012. (see video below) 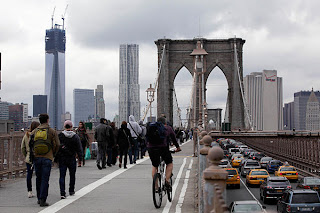 The news from the northeast this morning is both uplifting and sobering. The people of New York and New Jersey have surged into recovery mode with energy and determination. Superstorm Sandy hit the northeast harder than any other storm in memory, and yet this morning public transportation services have all reopened (the fare is free for the next couple of days!): bus service is 80% back on the streets, limited subway service has begun again and the Amtrak train service is also up and running, albeit with limitations in the hardest hit areas. If it isn't under water or hasn't suffered severe flood or storm damage, the people of the northeast are putting it back to work! That is the spirit of American resilience. It is also - crucially - the effect of a well-prepared and well-funded public infrastructure. My hat is off to the people who were affected by Sandy all through the eastern half of the country.

I wrote earlier this month about the danger of the willful blindness - some would call it criminal negligence - of those unholy allies: corporate special interests and the religious right. Scientists, environmentalists and thousands of ordinary citizens have recognized for decades that human lives on this planet are in peril and that we must take action to reverse the damage before it is too late. But powerful lobbies of energy corporations - backed up by religious hardliners with an eschatological agenda - embarked on a systematic campaign of climate change denial. In a self-serving exercise which may go down in history as the worst ever crime against humanity, they succeeded in suppressing the scientific data, creating an utterly false "controversy" and undermining the scientific community's effort to warn the world.

And we have been allowing it to happen. 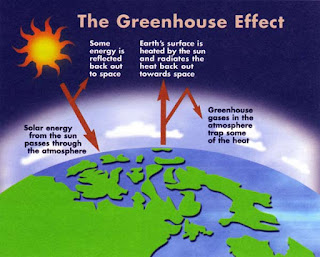 Mitt Romney's sarcastic jab at the President about sea level rise - not to mention his party's enthusiastic laughter - points to a kind of insanity which has infected American society like a relentless and deadly virus. The tragedy of it all is that we knew better. We know better. We had the science and we had the engineering know-how to slow down the greenhouse effect which has accelerated the earth's natural warming cycle so precipitously. We have (or at least we did have) the ability to slow global climate change - maybe just long enough to develop coping strategies for the new age of melted polar ice and increasingly violent storms, droughts and deluges - but we have allowed plutocrats to call the shots, using religious fanaticism to sway enough voters to defeat greenhouse gas mitigation initiatives.

The United States has always had a dangerous vulnerability in that the vast swathe of good, sensible moderate Americans have always had a fatal blind spot: uncritical respect for religious belief. We have always given religion too much credit as a force for "good" in society, even when it is blatantly perpetrating evil.  Perhaps to protect our own cherished religious identity, we have been too willing to ascribe extreme and harmful religious beliefs to fringe groups out there somewhere who are not "real Christians" like ourselves or anyone we actually know.

What we keep forgetting is that effective religious leadership and indoctrination can transform millions of followers into foot soldiers for evil. We forget that authoritarian movements in the 20th century appealed to religious belief to justify their vicious regimes, yet the ordinary people - believers all - had little sense that it was they who had allowed evil to happen. Religious belief suspends moral judgement. It opens the door for scriptural justification of immoral behavior - everything from lying to mass murder can be justified by the Bible - and lets in opportunists who intend to cash in on that fact. 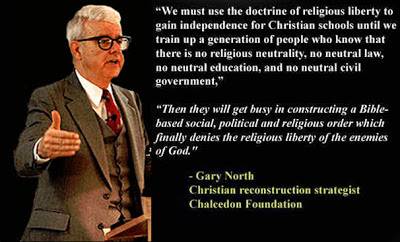 In The United States thirty years ago, those opportunists were energy corporations and other special interests who stood to gain from climate change denial and Christian Dominionists who, with corporate financial backing,  hoped to gain power enough to completely control the United States and eventually the world. Corporations had money for climate change denial campaigns, but needed popular support to get business-friendly congressmen elected. Christian Evangelicals had the potential to rally millions of voters and a religious zeal for Christian Dominionism which saw opportunity in corporate financial backing for their proselytizing effort. In the early days of the global environmental movement, energy plutocrats joined forces with ambitious Christian evangelicals under the Republican party banner to further their separate goals through political power.

More than a generation has passed since that unholy alliance was forged by the Reagan Republicans. That political victory ushered in a new era of corporate deregulation and religious infiltration into the public sphere. While huge corporations enjoyed historic tax cuts and corporate welfare, draining the public coffers on one side, Christianists' power grew through schools, colleges and the homeschooling movement (rejuvenated and expanded in the Reagan era). The reality-denying, Bible-based belief system was disseminated throughout the culture eventually moving into the mainstream as the religious influences on education, media and the public perception of reality became ubiquitous and seemingly unstoppable. We let down our guard against the dark underside of religious belief. We stood by smiling tolerantly as religion quietly and stealthily renewed its campaign to take over western society. On some level, most of us know that religion has ferociously demanded to rule the world for most of human history, yet, how quickly we 'forget' when challenging Christian Dominionism might threaten our own cozy Christian identities!  How easily we believe that "American Exceptionalism" means that destructively radical religion cannot happen here.

We did not protest as religion attacked science in schools and in society, even as the theories and scientific discoveries - truthful reality upon which nearly all of modern medicine and technology are built - were being treated as mere rival "beliefs" to the supernatural Bible-based mythology of the religious.  We did not point to the hypocrisy and irrationality of religious extremists both using modern medical research and claiming that the science upon which it rests is false. We allowed false religious mythology to be injected into public education as science, misleading a generation of schoolchildren and undermining our ability to compete in the world of technological and scientific progress while we pretended that Christian fundamentalism was a fringe movement and a benign one at that. Thanks to the gutting of public education and the rise of "Christian" schools, nearly half of all Americans no longer accept the theory of evolution, deny global climate change is happening and believe that the world will come to an end during their lifetimes. 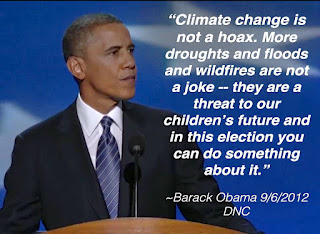 These people will vote Republican, the party which is owned by the energy corporations in whose interest it remains to limit environmental protection laws and to deny that human-assisted global climate change poses a real threat to human life on this planet. They think they can buy their way to safety. What is your plan?

We allowed this to happen. But we can stop it from continuing.

"He didn’t simply dismiss global warming, or reject policies intended to address or mitigate against sea level rise, which is closely tied to global warming. Politicians do those things all the time. It’s ill-informed and irresponsible. But Romney took this a step further: he used the very idea of controlling sea level rise as a mere rhetorical device, a laugh line to mock Barack Obama‘s grandiosity. And he milked it for a few long seconds as the crowd at the Republican National Convention laughed...
This is becoming a severe social and political problem because so many people around the world, and millions of them in the United States (including Romney’s Boston headquarters) are located along coastlines. Approximately 10% of the world’s population lives at elevations of 10 meters or less above sea level, the Science paper notes, and many of these places suffer from subsidence, erosion, and other problems that hasten their exposure and possible demise.
The biggest risk here is from storms, which can suddenly pump up sea levels by many meters, with little warning. People like living near coastlines, and, in the U.S. and other parts of the developed world, coastal development has surged in recent years. But most assumptions for development and flood protection assume a certain stability that no longer exists. Denying this (as some state and local governments are doing) is crazy: sooner or later, the people living in these places, and the businesses they built there, will pay the price.
So Romney’s notion that helping families and protecting communities against sea level rise are somehow diametrically opposed is silly. He knows better."
Romney's Rising Oceans Joke, John McQuaid, Forbes, August 31, 2012.

It is also a step change in the way that politicians talk publicly about climate change.  So this is no longer a debate about the science, or  the policy response (as it was under Bush)- it is now a debate about competing versions of reality and fantasy. The line about slowing the rise of the oceans is skillfully chosen as it frames climate change as both a natural cycle and an inevitability. The mocking pause clearly signals that attempts to stop it are therefore a self aggrandising  folly. Here in Britain the resonance would be with King Cnut (Canute) who ordered the tide to stop coming in. I suspect in America is more likely to be with Moses. It is a quote that appears on some Christian Conservative sites as evidence that Obama claims to be the Messiah.
Romney Channels Beck, George Marshall, Climate Change Denial, August 31, 2012.

If you’ve followed the U.S. news and weather in the past 24 hours you have no doubt run across a journalist or blogger explaining why it’s difficult to say that climate change could be causing big storms like Sandy. Well, no doubt here: it is.

Posted by NiftyWriter at 8:45 AM