"Socialism never took root in America because the poor see themselves not as an exploited proletariat but as temporarily embarrassed millionaires." John Steinbeck

(Today's CNBC story about "Monopoly Man" photobombing the senate Banking Committee hearing on the Equifax data breach reminded me of a post I made back in 2012. Here it is, updated for 2017.)

Do you remember playing the board game Monopoly back when kids did not have awesome hand-held devices to play with? Do you remember how the "banker" carefully doled out an equal sum of money to every player so they all had equal "chances" before the first roll of the dice? Equal opportunity ended at this point, because the capricious odds of rolling the right number to land on the best spaces was entirely down to chance. As soon as one player had bought the best group of properties, his fortunes would steadily rise.

Sure, the other players would remain hopeful for another 20-30 minutes - after all, they, too, had managed to land on and purchase a few properties and who knew? Their luck could change at any minute and they might land on Free Parking and claim the pot of cash in the middle of the board! Meanwhile, the luckiest player on the board - the one who had the luckiest rolls of the dice in the early minutes of the game - would steadily add houses and hotels, steadily increase his holdings, as other players sold out to him to stay alive in the game. Inexorably, the player with the earliest advantage wound up winning the game - not merely winning a game with other players still respectably turned out - but overwhelmingly and singularly winning: raking in total ownership of the properties, the utilities, and the contents of the bank while every other player sat bankrupted; wiped off the board.

It turns out that what your dad told you is true: in many ways life really is like a Monopoly game. (Except for that part about starting the game off with an equal share of the available resources). Wealth builds on wealth. As the wealth of an elite few increases, the wealth of everyone else tends to decrease because in a world of finite resources,  the continued growth of wealth for those at the top of the social ladder inevitably means that they control more and more resources and property, buying or forcing out those people with fewer resources and less capital - and "those people" are the vast majority of people.

Monopoly rules at least give every player a fighting chance to win against the fickle finger of fate by starting them off with equal wealth and a clear playing board. In real life, this is tragically never the case. Societies do not provide a level playing field for all children to start out with equal opportunities in life.  Poverty, social stratification, racial and gender discrimination and destruction of public education mean that most children in our country are born disadvantaged, sometimes grossly so. Economic and personal success in life is closely linked to the economic status of one's parents.  Children of the poor are likely to remain poor, while children of the rich are likely to remain rich regardless of the personal efforts of the children from either socio-economic group. The elites who intend to ensure that their own children can ascend to even loftier perches over everyone else's children have myriad strategies to keep the game of life in America rigged in that way, and they have the economic resources to buy the political power to make those strategies the law of the land. 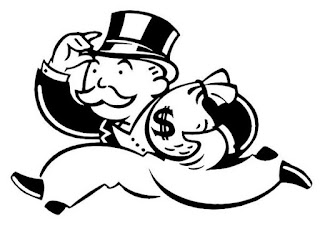 So, when Paul Ryan or Jason Chaffetz or Ron Johnson or Mitt Romney claim that 47% of the people in the United States are mooching "takers", think of Monopoly. For most Americans, the dice are loaded against them and they don't even get to start the game with an equal share of the bank. Republican claims that the struggling middle class and the disenfranchised poor have had just as much opportunity as the children of the wealthiest Americans, but simply are too lazy to work for the American dream is an appeal to the worst part of human psychology; the part that tells us we deserve our blessings and other people deserve their hardships. It is a lie. And it is a very convenient lie for the Republicans hoping to pass tax cuts for the wealthy since so many people are willing to believe it.

Americans have an unusually strong belief in meritocracy. In other nations, circumstances at birth, family connections, and luck are considered more important factors in economic success than they are in the U.S. This meritocratic philosophy is one reason why Americans have had relatively little objection to high levels of inequality—as long as those at the bottom have a fair chance to work their way up the ladder. Similarly, Americans are more comfortable with the idea of increasing opportunities for success than with reducing inequality. When the American public is asked questions about the importance of tackling each, a far higher proportion is in favor of doing something about ensuring that more people have a shot at climbing the economic ladder than is in favor of reducing poverty or inequality.

Being Poor Is Too Expensive, Eric Ravenscraft, LifeHacker, October 20, 2015.

When you’re poor, you can’t afford to think about the “long run.” I knew that it was smart to buy some stuff from big membership stores, but I couldn’t even get past the membership fees. I knew that eating gas station hot dogs and ramen was going to kill me some day, but as long as that day wasn’t before rent was due, I had to live with it. I probably could’ve done marginally better if I planned to cook more meals ahead of time but I, like 6.8 million Americans according to the Bureau of Labor Statistics, had to work multiple jobs to get by. I didn’t have enough time to be healthy, and I didn’t have enough money to save money.

Some Are More Unequal Than Others, Joseph E. Stiglitz, New York TImes, October 26, 2012.

That American inequality is at historic highs is undisputed. It’s not just that the top 1 percent takes in about a fifth of the income, and controls more than a third of the wealth. America also has become the country (among the advanced industrial countries) with the least equality of opportunity. Meanwhile, those in the middle are faring badly, in every dimension, in security, in income, and in wealth — the wealth of the typical household is back to where it was in the 1990s. While the recession has made all of this worse, even before the recession they weren’t faring well: in 2007, the income of the typical family was lower than it was at the end of the last century...
America is fast becoming a country marked not by justice for all, but by justice for those who can afford it. (Just one of many examples is that no banker has been prosecuted, let alone convicted, for banks’ systematic lying to the court regarding the fraudulent practices that played so large a role in the 2008 crisis.) And with the increasing influence of money, especially notable in this election, the outcomes of our political process are becoming more like one dollar, one vote than one person, one vote. It’s even worse, because political inequality leads to economic inequality, which leads in turn to more political inequality, in a vicious spiral undermining our economy and our democracy.

The general presumption of most inequality researchers has been that earned income, usually salaries, is where all the action is, and that income from capital is neither important nor interesting. Piketty shows, however, that even today income from capital, not earnings, predominates at the top of the income distribution. He also shows that in the past—during Europe’s Belle Époque and, to a lesser extent, America’s Gilded Age—unequal ownership of assets, not unequal pay, was the prime driver of income disparities. And he argues that we’re on our way back to that kind of society.

Posted by NiftyWriter at 9:44 PM