the use of violence and threats to intimidate or coerce, especially for political purposes.
2.

the state of fear and submission produced by terrorism or terrorization.
3.

a terroristic method of governing or of resisting a government.


If you were frightened and confused by the horrific events in Las Vegas Sunday night, or in Sandy Hook, or in Aurora, Colorado or... the roughly 1400 mass shootings since Sandy Hook, (but, it's the "price of freedom", everyone), Christian hardliners want you to know that they have their God has everything under control.  They  believe that it is good that you were frightened. Hopefully, you will remain frightened for a long time. Your fear and anxiety are exactly what they say the Biblical god demands and wants. Christians want you to know that it was their god's rage over the slight easing of fearfulness in society which prompted Him to deputize these killers to ram the message of His righteous anger into the hearts and minds of the American people through the senseless slaughter of innocents.

We need to pay attention to this. According to the American Family Association's Fred Jackson, killers are used by the Christian god to terrorize the American people. In spite of the ever-increasing radicalization of the population through Christian evangelism, and an historic level of unconstitutional religious encroachment into the public sphere, elite Christian leaders insist that there is still not enough fear in American society. Too few Americans accept the authority of church elites God with enough unquestioning obedience. Not enough Americans fear the power of Christianity God with the proper servility. And fundamentalist Christian church leaders know just who to blame:

"Jackson: I have to think that all of this, whether it’s the Hollywood movies, whether it’s what we see on the internets [sic], whether it’s liberal bias in the media, whether it’s our politicians changing public policy, I think all of those somehow have fit together—and I have to say also churches who are leaving the authority of Scripture and losing their fear of God—all of those things have seem to have come together to give us these kinds of incidents.
Newcombe: I think that’s so true. It’s as if we said to God, publicly or in the public arena, ‘get out, You’re not welcome here anymore’ and it’s as if God removed His protection from our land.
Jackson: I think the sources of this is [sic] multifaceted but you can put it all I think under the heading of rebellion to God, a rejection of the God of the Bible.* I think along with an education system that has produced our lawyers, our politicians, more teachers, more professors, all of that sort of thing, is our churches, mainline churches. We’ve been dealing Teddy and I know the AFA Journal has been dealing with denominations that no longer believe in the God of the Bible, they no longer believe that Jesus is the only way of salvation, they teach that God is OK with homosexuality, this is just increasing more and more. It is mankind shaking its fist at the authority of God.
James: And God will not be silent when he’s mocked, and we need to remember that.
Jackson: We are seeing his judgment. You know, some people talk about ‘God’s judgment must be just around the corner,’ we are seeing it." -( conversation between the popular rightwing Christian radio host, Fred Jackson, Jerry Newcombe of Truth in Action Ministries and Jackson's co-host Teddy James of AFA Journal).

*(Let's cut to the chase here: "Rebellion against God" is code for "rebellion against unconstitutional religious influence". When civil rights groups protest the unconstitutional religious interference in government, they are accused of "rebellion against God". "Rejection of God" is code for "rejection of inappropriate religious attacks on individual rights and freedoms". When conservative Christian groups attempt to deprive citizens of their human rights, the people who protest are accused of "rejecting God").

According to the self-appointed spokesmen for God, the all-loving, all-knowing, all-powerful (also silent and invisible) Creator of the Universe is understandably outraged when humankind fails to tremble in terror at the very thought of Him, yet He is curiously incapable of easily and lovingly repairing the error in His own creation.  So, we are told that every now and then He causes a terrible event on earth (or fails to prevent a terrible event - same difference, really, since His presence and His absence are equally indiscernible) to remind us of our sinful failure to fear Him enough. His spokesmen then gleefully point to these disasters as evidence that all the things which threaten them Biblical supremacy in American society are evil and should be blamed for the pain and suffering of innocents.

(Apparently, they can't explain why God never seems to target the specific objects of their His wrath directly, nor why they expect anyone to believe that a god who would rain down terrible suffering on innocent men, women and children as an object lesson to sinners should be considered a "loving" god.)

1. to coerce or control by violence, fear, threats, etc.
2. to inspire with dread; terrify 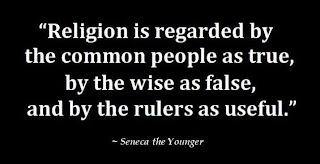 The terror evoked by random acts of violence is a feature, not a bug, in the eyes of the powerful Christian elites Almighty. It has proven to be a very useful weapon in the ongoing battle for Christian world dominance.  By planting the seeds of fearful hatred in the minds of already traumatized believers and then redirecting that fear toward those who resist Christian hegemony, the religious right - and its political arm, the Republican party - divides and polarizes society into "us" and "others", with themselves as the authorities ruling over the ever-growing coalition of  "us". The fear of God's wrath is wielded to ensure fearful compliance, and - since "God" is never seen nor heard by anyone - Evangelical leaders appoint themselves as His spokesmen and the ultimate interpreters of His righteous will, ensuring that their will is rarely effectively challenged.  They systematically coerce the population of believers - through fear of their god inculcated from earliest childhood - and coerce non-believers - through social pressure (as believers' fear grows that other citizens who are not like "us" will bring god's wrath down on themselves, even if they are innocent, god-fearing believers!) - to be less and less tolerant of differences, and to demand greater and greater conformity to their religious authority. In short, they assign all of the power over society that is hypothetically "God's awesome power" - to themselves.  It is terrorism-by-proxy; stochastic terrorism. And it is very effective.

Random terrible events happen: they always have and they always will. The evil genius of fundamentalist Christians is that they know how to use these inevitable natural and man made disasters as tools for their own Machiavellian brand of power consolidation. They harness fear and bigotry created by religious teaching and redirect it into hatred toward the elements in society which threaten their own power, thus eliminating their enemies and removing all barriers to their dream of an American theocracy. They terrorize the vulnerable victims of a local or national disaster with the dread of an angry god - evoking the same terror of god's wrathful jealousy which was inculcated through childhood indoctrination - and then they direct that frightened anguish toward others whose refusal to accept Christian authority they accuse of bringing this suffering down upon innocent, persecuted Christians.

It is an awesome one-two punch: a form of terrorism more lethal to our pluralistic, democratic Republic than anything the United States has ever faced. Terrorized people historically bow to the perceived security of authoritarianism. It is a human response to fear. The power of religious belief, inculcated early and reinforced regularly - especially in the public sphere - enables church elites to use the fear of God to coerce a population to destroy church enemies, to support religious agendas and to obey church elites, all without lifting a finger!  Of course, in places where there is too much human-created peace, tolerant multi-cultural social order and too few natural disasters, strong Christians will do what they have to do to help themselves their god out.

In the USA, where there is no shortage of natural sources of human misery, the Christian right still furthers their own ambitions helps their god out by doing their utmost to incite violence and human conflict through the constant drumbeat of fear and othering.  The dignity and humanity of the victims of natural and man-made horrors is nothing to them, when measured against what they perceive is their god-given right to use the horrible tragedy for their own political gain. We don't know yet what the Las Vegas murderer's motive was, and we may never know, but whatever Paddock may think his own motives were,  influential Christians want everyone to believe that he was the unwitting lash of their God's judgment. The truth doesn't matter to the Christian right, nor does common human decency. For them, the massacre has already served its purpose.