"Socialism never took root in America because the poor see themselves not as an exploited proletariat but as temporarily embarrassed millionaires." John Steinbeck

Do you remember playing the board game Monopoly back when we did not have awesome hand-held devices to play with? Do you remember how the "banker" carefully doled out an equal sum of money to every player so they all had equal "chances" before the first roll of the dice? Equal opportunity ended at this point, because the capricious odds of rolling the right number to land on the best spaces was entirely down to chance. As soon as one player had bought the best group of properties, his fortunes would steadily rise. Sure, the other players would remain hopeful for another 20-30 minutes - after all, they, too, had managed to land on and purchase a few properties and who knew? Their luck could change at any minute and they might land on Free Parking and claim the pot of cash in the middle of the board! Meanwhile, the luckiest player on the board - the one who had the luckiest rolls of the dice in the early minutes of the game - would steadily add houses and hotels, steadily increase his holdings, as other players sold out to him to stay alive in the game. Inexorably, the player with the earliest advantage wound up winning the game - not merely winning a game with other players still respectably turned out - but overwhelmingly and singularly winning: raking in total ownership of the properties, the utilities, and the contents of the bank while every other player sat bankrupted; wiped off the board.

It turns out that what your dad told you is true: in many ways life really is like a Monopoly game. (Except for that part about starting the game off with an equal share of the available resources). Wealth builds on wealth. As the wealth of an elite few increases, the wealth of everyone else tends to decrease because in a world of finite resources,  the continued growth of wealth for those at the top of the social ladder inevitably means that they control more and more resources and property, buying or forcing out those people with fewer resources and less capital - and "those people" are the vast majority of people.

Monopoly rules at least give every player a fighting chance to win against the fickle finger of fate by starting them off with equal wealth and a clear playing board. In real life, this is tragically never the case. Societies do not provide a level playing field for all children to start out with equal opportunities in life.  Poverty, social stratification, racial and gender discrimination and destruction of public education mean that most children in our country are born disadvantaged, sometimes grossly so. Economic and personal success in life is closely linked to the economic status of one's parents.  Children of the poor are likely to remain poor, while children of the rich are likely to remain rich regardless of the personal efforts of the children from either socio-economic group. The elites who intend to ensure that their own children can ascend to even loftier perches over everyone else's children have myriad strategies to keep the game of life in America rigged in that way, and they have the economic resources to buy the political power to make those strategies the law of the land. 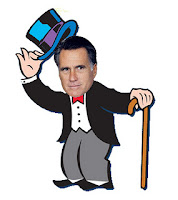 So, when Bishop Romney or lyin' Paul Ryan claim that 47% of the people in the United States are mooching "takers", think of Monopoly. For most Americans, the dice are loaded against them and they don't even get to start the game with an equal share of the bank. Republican claims that the struggling middle class and the disenfranchised poor have had just as much opportunity as the children of the wealthiest Americans, but simply are too lazy to work for the American dream is an appeal to the worst part of human psychology; the part that tells us we deserve our blessings and other people deserve their hardships. It is a lie.

And it is a very convenient lie for the Romney and Ryan since so many people are willing to believe it.

Some Are More Unequal Than Others, Joseph E. Stiglitz, New York TImes, October 26, 2012.

That American inequality is at historic highs is undisputed. It’s not just that the top 1 percent takes in about a fifth of the income, and controls more than a third of the wealth. America also has become the country (among the advanced industrial countries) with the least equality of opportunity. Meanwhile, those in the middle are faring badly, in every dimension, in security, in income, and in wealth — the wealth of the typical household is back to where it was in the 1990s. While the recession has made all of this worse, even before the recession they weren’t faring well: in 2007, the income of the typical family was lower than it was at the end of the last century...
America is fast becoming a country marked not by justice for all, but by justice for those who can afford it. (Just one of many examples is that no banker has been prosecuted, let alone convicted, for banks’ systematic lying to the court regarding the fraudulent practices that played so large a role in the 2008 crisis.) And with the increasing influence of money, especially notable in this election, the outcomes of our political process are becoming more like one dollar, one vote than one person, one vote. It’s even worse, because political inequality leads to economic inequality, which leads in turn to more political inequality, in a vicious spiral undermining our economy and our democracy.

The one tax graph you really need to know, Ezra Klein, The Washington Post, September 19, 2012.

For most Americans, payroll and state and local taxes make up the majority of their tax bill. The federal income tax, by contrast, is our most progressive tax — it’s the tax we’ve designed to place the heaviest burden on the rich while bypassing the poor. And we’ve done that, again, because the working class is already paying a fairly high tax bill through payroll and state and local taxes.
But most people don’t know very much about the tax code. And the federal income tax is still our most famous tax. So when they hear that half of Americans aren’t paying federal income taxes, they’re outraged — even if they’re among the folks who have a net negative tax burden! After all, they know they’re paying taxes, and there’s no reason for normal human beings to assume that the taxes getting taken out of their paycheck every week and some of the taxes they pay at the end of the year aren’t classified as “federal income taxes.”

Describing his own path, Romney noted that he gave away the money his father left him. “I have inherited nothing,” he said. “Everything I earned I earned the old-fashioned way.”

There’s only one thing wrong with this cozy, self-satisfied worldview: It omits the enormous advantages accruing to those born on third base. It ignores the grim reality that those born to less-privileged families are far less likely than the Bushes or Romneys of the world to secure their place in the middle class or above.

It imagines an America where economic mobility is far more fluid than it is in reality. Being born in America is an advantage, to be sure, but some spoons are a lot more sterling than others. (Ruth Marcus)

Romney lashed out at people who believe they are victims and are entitled to health care, food and housing. However, many entitlement programs are not for the nation's poor, said Michael Tanner, a senior fellow at the libertarian Cato Institute. Among the largest entitlements are Social Security and Medicare, and the beneficiaries of those programs are mainly retirees.

Many of the poor who receive income-based benefits do work, Tanner added.

Nearly half of households with children that received food stamps in 2010 also had a working family member, more than three times the number who relied solely on welfare, according to the left-leaning Center on Budget and Policy Priorities. To qualify for food stamps, families must generally have a total monthly income at or below 130% of the poverty line. (Tami Luhby)

The new Ryan budget is a remarkable document — one that, for most of the past half-century, would have been outside the bounds of mainstream discussion due to its extreme nature. In essence, this budget is Robin Hood in reverse — on steroids.  It would likely produce the largest redistribution of income from the bottom to the top in modern U.S. history and likely increase poverty and inequality more than any other budget in recent times (and possibly in the nation’s history).  It also would stand a core principle of the Bowles-Simpson fiscal commission’s report on its head — that policymakers should reduce the deficit in a way that does not increase poverty or widen inequality. (Robert Greenstein)