In honor of International Women's Day, may I present a great story about a remarkable woman. This story has it all: a courageous heroine, vicious enemies, conflict, cultural relevance, tension and drama. And a very satisfying conclusion. It's like the best video game ever! 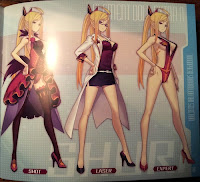 Anita Sarkeesian is a young feminist. She has also been an enthusiastic video gamer since childhood. As she grew from happily video-playing child to thoughtful teen and feminist adult, Sarkeesian became increasingly disturbed by the portrayal of female characters in video games. It seemed that the vast majority of female-identified characters were either victims, trophies or wily (lying) temptresses - always, always hyper-sexualized and all too often brutalized as some part of the storyline.

Sarkeesian talked about this portrayal of women in video games on her video blog as part of the overall discussion of the issue of the negative depictions of women in all aspects of popular culture. She discussed it with other gamers, too, and while she did receive encouraging feedback from many, she also received angry blowback from some. Recognizing that this sexist portrayal of women characters was not accidental, Sarkeesian decided to try to examine the issue a little more closely.

In 2012, Sarkeesian made the "mistake" of launching a Kickstarter campaign to fund a series of videos examining the prevalence of sexist gendered stereotypes in video games. While the project was hailed as a great idea by many feminist gamers (both men and women), it was met with outrage by a significant subset of gamers and misogynists on the internet. The resulting firestorm of misogynistic harassment ranged from expletive-laced comments on the website to threats of rape, torture and death. Her blog, Feminist Frequency, was hacked. Enraged gamers created "games" featuring Sarkeesian as a character who is raped, beaten or killed (or all three) - one was called "Beat up Anita Sarkeesian" and featured the *fun* of punching the animated Anita until the blood-spatter turns the screen red. Furious gamers sent videos of the violence being done to her "game character", perhaps meant as a warning and a threat, but undoubtedly meant to harass, intimidate and silence her.

Fortunately for young women everywhere - and more directly for women gamers - Anita Sarkeesian did not let the harassment silence her. She persevered in her quest. Other feminist gamers supporting her effort spread the word about the Kickstarter and the rest, as they say, is history.  Here is Anita Sarkeesian speaking at TED+Women last fall telling the story in her succinct, engaging and calmly awesome way:

Online harassment - even harassment that reaches criminal levels - is almost never successfully prosecuted. The law has not caught up to the technology yet and in any case the anonymity and enormous size of the online population makes enforcement of any laws problematic.  The internet is the perfect home for enraged cowards who lob verbal and visual attacks at their targets before scuttling away into the shadows of the interweb. While it is likely that most of these lowlifes would never risk their own hides by coming out into the open and attacking the object of their wrath in real life, the sobering fact that no one can be certain about what rage-filled people might do is often enough to frighten a victim of online harassment into silence.

The goal of the anti-feminists who perpetrated the campaign against her was to silence Anita Sarkeesian through online harassment so vicious and threatening that it is actually nauseating to read about.  Instead of achieving their goal, however, they inadvertently assisted her in her goal of funding the video series. With great courage and determination, Sarkeesian not only continued to promote her project but she actually used the online campaign of terror against her as a case in point supporting the need for exactly the series her kickstarter was attempting to fund.

The TED talk linked above occurred last fall and this week, Ms. Sarkeesian released the first video in the series, Damsel in Distress: Part 1 - Tropes vs Women in Video Games.

Upcoming videos in the series will include:

In addition to what looks to be a fantastic series of videos about this issue, Sarkeesian is developing materials for a classroom curriculum kit to help educate a future generation of gamers and internet media participants. As she pointed out in her TED+Women talk, "video games are the fastest growing form of mass media today". This is a huge communication tool, with enormous power to influence and shape our culture. As a society, we can sit back and allow it to more deeply entrench harmful tropes which dehumanize, objectify and exclude women or we can use it to help build a more just and equitable society.

Clearly, a significant, vocal and vicious subset of society wishes to enforce compliance with the first option. But feminists like Anita Sarkeesian and her supporters have fought for and achieved a small step toward ensuring that the second option has a chance to flower.

In short, Anita Sarkkeesian pwned the very people who wanted to force her to shut up and go away.

Take a few minutes to view the masterfully done video below. It is entertaining, quick-moving, and makes its points clearly and concisely. The video clips from some of my favorite games are fun, too!


"In the game of patriarchy, women are not the opposing team; they are the ball."

Posted by NiftyWriter at 1:46 PM