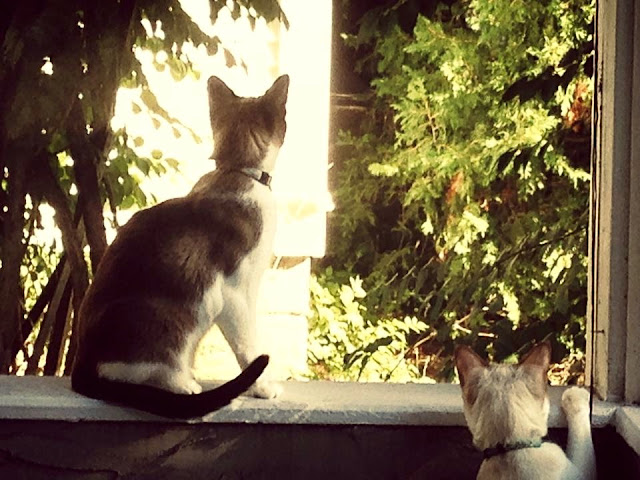 Gentle eyes that see so much,
paws that have the quiet touch,
Purrs to signal "all is well"
and show more love than words could tell.
Graceful movements touched with pride,
a calming presence by our side
A friendship that takes time to grow
Small wonder why we love them so. 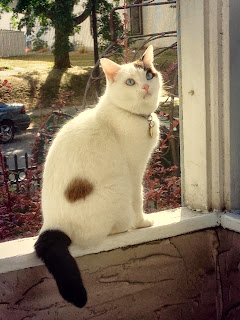 I've been very busy all summer.

One wonders if my Humans are completely mad.

Or two. The twins wonder about everything

every second of the day.

The Cat of the House

Over the hearth with my 'minishing eyes I muse; until after
the last coal dies.
Every tunnel of the mouse,
every channel of the cricket,
I have smelt,
I have felt
the secret shifting of the mouldered rafter,
and heard
every bird in the thicket.
I see
you
Nightingale up in the tree!
I, born of a race of strange things,
of deserts, great temples, great kings,
in the hot sands where the nightingale never sings!

Posted by NiftyWriter at 3:00 AM No comments:

May I present to you some must-see video?

Our very own Apollo will demonstrate why no home should be without a cat.

When they were born there was no one to care,
they were cold & hungry and had fleas in their hair.

Then came the day when they found a new home,
with food always there and toys of their own.

A meowmie to snuggle with and a daddy to play,
for the first time in their lives it's going their way.

Now nothing can hurt them, they can be cold again never,
they can finally be happy, for now and forever. 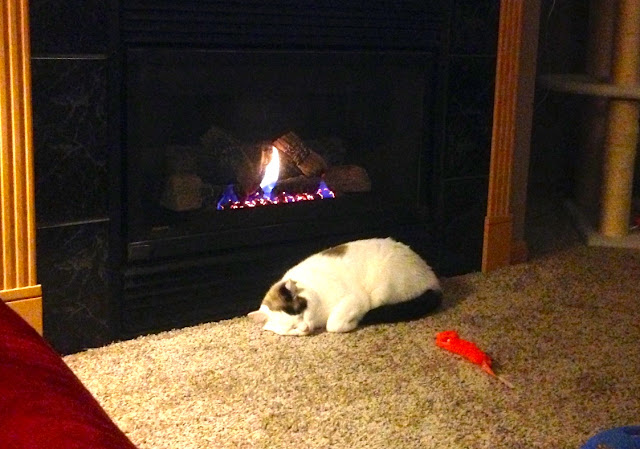 I have had a difficult couple of weeks.

We have moved house. I dislike moving house.

My Humans appear to have lost their minds.

Apparently, Chicago was not cold enough for them, so we have moved to Minnesota.

There is only so much a cat can do to restore order to the universe when her Humans take leave of their senses.

I have supervised the twins. I have kept the home fires burning. I have done everything.

Now, I am taking a well-deserved siesta.


CAT IN WINTER
(A Soutar)

As winter's dusk engulfs the day,
He ventures out to hunt his prey,
With eyes as hard and cold as ice,
He waits for unsuspecting mice,
A little lion out to kill,
Impervious to icy chill.

He's heard this is what he should do,
But he's not really sure it's true,
He knows that cats are brave and bold,
And really do not mind the cold,
But though he knows he should stalk prey,
He'd rather stay at home and play.

Warm and cosy, snug and fed,
This winter cat goes up to bed,
But sometimes when the moon is full,
The age-old instincts start to pull,
Then in the night, beneath the sheet,
He wakes and kills his owner's feet. 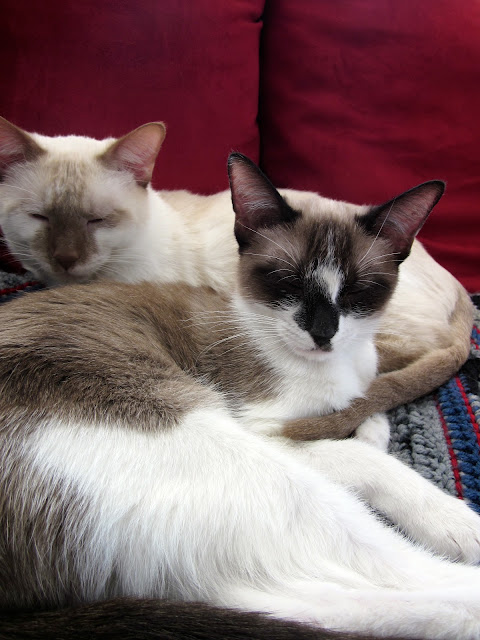 I am miffed because we are still without snow.

I have decided to amuse myself by putting my two companions to work today.

Artemis and Apollo will entertain you.

What's that? They are asleep? Well, that makes a pleasant change around here!

Shh! Don't wake them up. Finally, I can survey my domain in peace and tranquility.

Although, they are rather endearing...
in an annoying, kittenish way.

I had decided to amuse myself by putting the A-team to work today, but they are asleep.

(sigh) Do I have to do everything?

Here is a poem. Enjoy.

It's better to be a cat than to be a human.
Not because of their much-noted grace and beauty—
their beauty wins them no added pleasure, grace is
only a cat's way

of getting without fuss from one place to another—
but because they see things as they are. Cats never mistake a
saucer of milk for a declaration of passion
or the crook of your knees for

a permanent address. Observing two cats on a sunporch,
you might think of them as a pair of Florentine bravoes
awaiting through slitted eyes the least lapse of attention—
then slash! the stiletto

or alternately as a long-married couple, who hardly
notice each other but find it somehow a comfort
sharing the couch, the evening news, the cocoa.
Both these ideas

are wrong. Two cats together are like two strangers
cast up by different storms on the same desert island
who manage to guard, despite the utter absence
of privacy, chocolate,

useful domestic articles, reading material,
their separate solitudes. They would not dream of
telling each other their dreams, or the plots of old movies,
or inventing a bookful

of coconut recipes. Where we would long ago have
frantically shredded our underwear into signal
flags and be dancing obscenely about on the shore in
a desperate frenzy,

they merely shift on their haunches, calm as two stoics
weighing the probable odds of the soul's immortality,
as if to say, if a ship should happen along we'll
be rescued. If not, not.

by Katha Pollitt
Posted by NiftyWriter at 10:49 AM No comments:

Email ThisBlogThis!Share to TwitterShare to FacebookShare to Pinterest
Labels: A and A, Freya, Love, TGIF
Older Posts Home
Subscribe to: Posts (Atom)