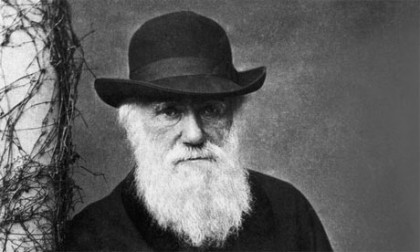 There is grandeur in this view of life, with its several powers, having been originally breathed into a few forms or into one; and that, whilst this planet has gone cycling on according to the fixed law of gravity, from so simple a beginning endless forms most beautiful and most wonderful have been, and are being,
evolved.

There has been an effort to have February 12 officially declared "Darwin Day" in honor of Charles Darwin who was born on this date in 1809. The famous naturalist is the author of The Origin of Species (full title: On the Origin of Species by Means of Natural Selection) his seminal work which first introduced the public to the theory of Evolution.

"As many more individuals of each species are born than can possibly survive; and as, consequently, there is a frequently recurring struggle for existence, it follows that any being, if it vary however slightly in any manner profitable to itself, under the complex and sometimes varying conditions of life, will have a better chance of surviving, and thus be naturally selected. From the strong principle of inheritance, any selected variety will tend to propagate its new and modified form." Charles Darwin

To mark Charles Darwin's 204th birthday, here is a BBC Horrible History performed by (an actor portraying) the man himself! As if this awesome video about an awesome man and an awesome subject is not enough of a treat, you get an extra bonus: the entire thing is set to the tune of David Bowie's awesome song, Changes!

Posted by NiftyWriter at 4:00 AM