Youth Apathetic About Election: Are You Kidding Me? 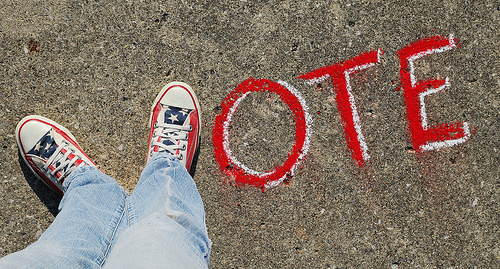 Vote as if your future depends upon it
- because it does!

Come on, young American adults! Is this really you? I don't believe that!

Does your state have early voting? If so, take advantage of it!

Why is it that in a nation that fought a historic battle for independence - not to mention the right to representative self-government - so few of the people today actually exercise that right by voting?  In a world where self-government and constitutionally-guaranteed individual freedoms are a rare and precious commodity, it beggars belief that people who have it do not appear to cherish it and fail to guard it vigilantly. The assumption seems to be that gains once made can never be lost. But history teaches another, grimmer, lesson.

There is a lot of talk right now about a tiny cabal of extremely wealthy and influential people pouring billions into the upcoming election in order to ensure an outcome which will suit their own interests and not those of the people of the United States. In a democratic Republic, the idea that wealthy or religious elites could rise to such power and influence that they could establish a de facto feudal economic system and authoritarian theocracy - almost exactly the conditions over which this country fought the War of Independence - could only be possible if a majority of the people allow it to happen, through ignorance, through apathy, through intimidation.

When all eligible voters in the country perform their civic duty at every election, and when all eligible voters make it their business to stay informed about the issues that face the nation, then it becomes far more difficult for any one group, no matter how well-organized and determined, to seize control of the government.

Posted by NiftyWriter at 8:38 AM