If the Right Wing Doesn't Speak For You, Who Does?


Something I've been hearing a lot during the recent chicken flap has been, "But not all Christians are like that! They don't speak for me!" and that kind of makes me wonder: If the Christian right does not speak for you, who does?

I've noticed that most of the people who spoke up passionately about the recent disturbing mob powerplay tended to be people within the LGBTQ community or non-religious people. The moderate Christians who claim to stand independent of the Christian right were conspicuously silent - as they have been on virtually every important social justice fight for the past 30 years. Among their closest non-religious friends, they will preach to the choir, but neither individuals nor church congregations who claim to have progressive views, seem to speak up strongly when the going is tough for marginalized people. 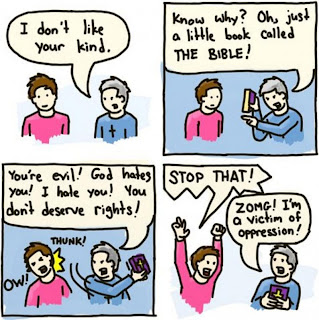 The chicken flap was a chance for people to stand up for justice, but it seems like the moderates just sat down again.

The modern medium of Facebook was the scene yesterday of the following dance, played out on home page after home page of moderate, progressive Christians. It went something like this:

-A few fellow moderate Christians "like" the post and perhaps add a word or two of cautious agreement. Perhaps a tepid WWJD reference is made. Several non-religious friends add enthusiastic agreement.

-A more orthodox Christian (who is often in the same church with the OP)  fires a warning shot across the OP's bow - comments something like, "I am so surprised to see you posting such an anti-Christian status."

-An awkward but meaningful moment of silence ensues during which a quiet ultimatum is apparently communicated. 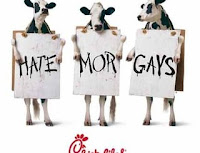 -The moderate Christian backs away from his original status, either completely negating it (often deleting it) or performing verbal gymnastics to make it acceptable to the Orthodox watchdog ie. no longer supportive of anything but the moderate Christian's desire not to be shunned by the church community. It's only chicken, after all...what is the big deal, amirite?

The thing is, it is not just chicken. This company spends millions supporting certified hate groups which actively work to oppress and dehumanize LGBTQ people. They spend millions to lobby legislatures to deny LGBTQ people equal rights. They use their power and financial clout against a marginalized and much weaker minority group. They even use their power and money to support overseas efforts to enact legislation to make being gay a capital crime punishable by death. Chick Fil A's legions of supporters have tried to paint this as a question of innocently differing opinions but there is a world of difference between "not agreeing with gay marriage" and actively funding hate groups which literally harm people.

If you say the socially conservative right wing does not speak for you, it means nothing unless you speak up for yourself and stand up for the values you claim to hold.  It means nothing to claim that there are millions of progressive Christians out there who want justice for LGBTQ people, for women or for other marginalized people unless those millions speak up for themselves as an important segment of society and stand up in defense of the values they claim to hold. Where are the strong moderate voices challenging and countering the radical right wing voices?  Where are the prominent progressive church leaders speaking out and challenging the hate and bigotry coming from the right wing leadership? Where are they?

The Christian right is doing real harm, ever day, to millions of people in this country. Christians number hundreds of millions of people, control billions in tax-free wealth, are hugely powerful in media and government - and yet, incredibly, the right wing is spinning this as a case of supporters of LGBTQ people bullying Christian supporters of Chick-Fil-A's anti-LGBTQ agenda because they are urging people to boycott the fast food chain." Moderates - who claim that the right wing is only a radical fringe of their religion - have the numbers, the financial clout and the political power to make a difference in this terribly uneven fight - if they truly want to make a difference.

The question is: do moderate Christians really want to see social justice?  Or does the conservative right wing actually, in fact, speak for you?