Santorum's Un-Americanism Should Make Us All Queasy

Slate has an article online discussing Rick Santorum's now infamous remarks last Sunday on ABC's This Week.  It is well worth reading.  This man is appalling.  With his "anti" stance on so many solid American values,  such as the separation of church and state,  he is sounding distinctly un-American. 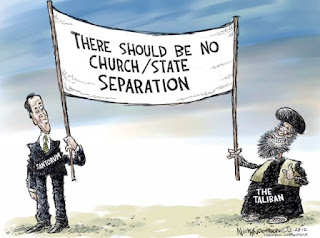 The comments below it are a little worrying,  but we all have to get used to that eventually, don't we?  Amazing how remarks that were almost unimaginable (among sane people, at least) are now an everyday occurrence, at least on the internet.

But even more worrying,  the Catholic Santorum shares the determination of fundamentalist, dominionist Protestant Christians to transform the United States into a Bible-based Christian nation answerable only to God. Where have we seen theocracy like this before? Oh yes. 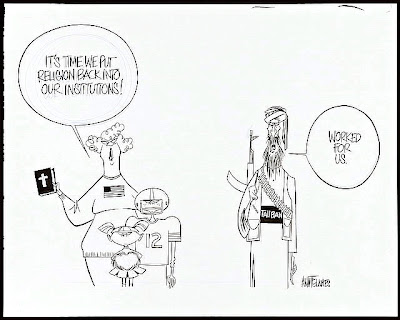 Anyway,  back on point.  So today the primaries in Michigan and Arizona will be decided.  Melissa McEwan at Shakesville reports that there is apparently a push by liberals to go to the polls in Michigan and vote Santorum over the top.  The rationale seems to be that with Santorum as the nominee,  President Obama will have no trouble winning in the general election next November.

I had the same thought that Melissa had -  WTF stupid dang foolery is this?!!!111??  Well, to be honest, Melissa was her usual witty self - saying,  "Ha ha I hope you are right because otherwise President Santorum!",  but the Timid Atheist lives up to her name:  I haven't the courage to actually make lolsob jokes about stuff like this:  I sputter WTF?  (as long as no one can overhear me) and crawl away to hug myself with a hot cup of tea.

Seriously,  can progressives not remember what happened in 2000 and, even more incredibly, in 2004?  People do vote for apparently unelectable candidates!  Even when the candidates lie constantly,  break the law, and are in almost every way, demonstrably and easily shown to be the opposite of what they claim to be.  When voters were asked what they thought about the candidates and their records,  most were able to reasonably evaluate them. So what explains the disconnect between what people think and understand about the reality in this country and what they eventually do in the voting booth?

What is truly frightening is that understanding reality just doesn't seem to matter to far too many voters.  People vote based on their emotions,  not on what is rational.  And very powerful gut reactions can be elicited by the use of the kind of campaign tactics we have all come to know and hate:  fear-mongering, hate-mongering,  othering.  It really does not matter how fit for office a candidate is as long as s/he has perfected the art of campaign manipulation of voters' gut feelings. "Sure Bush lied,  but I am still going to vote for him because I like him. He is a regular guy like me, unlike that other guy." (the fact that G W Bush was a child of incredible wealth and privilege cannot compete with the fiction that was created through the strategy of lies, fear and"othering").

The Republican party has that all figured out and has made it into an art form.  Even knowing this, the Democratic party seems incapable of coming up with a strategy to counteract this malevolent trend.  The Timid Atheist fears that this is because the human reality is that there is no strategy to counteract this vile form of voter manipulation - except to respond in kind.  We have seen a little of this in the form of negative Democratic ads (but please understand that I reject outright any false equivalency between the egregious long-term strategy of the far right - and its political arm the Republican party - and the more recent attempts of some Democratic party campaign managers to harness some of that negative energy and turn it back).

Realizing that some Democrats might be fumblingly attempting to use a strategy from the Republican playbook,  one of Santorum's superpacs has been sending robocalls to registered Democrats in Michigan urging them to vote for the Frothy one.  The calls give the impression that they are coming from fellow Democrats.  I hope voters in Michigan either do not pick up the phone or stay on the line long enough to discover who is really behind the calls.

As awful as a President Mitt Romney would be,  the prospect of Santorum,  Paul or Gingrich in the country's highest elected office is downright terrifying.  I would like to feel the kind of gleeful confidence that some pundits and intelligent people have been expressing in discussions that the American people will see through an extremist and will never vote him into office.  Sadly, I do not share their confidence.