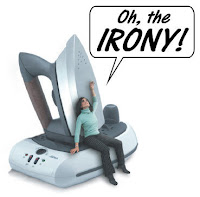 (This essay was first published in an older blog in 2004 before Christian fundamentalism cured me of religion.)-->


I used to have no problem with religion.  I am a regular (moderate, mostly cultural) Catholic church-goer myself.  I understand how important it is to most people to belong to a religious community.  Religion is important to a lot of people,  but something about the insistent fervor of public religiosity in the past few years is disturbing.   As a private obsession, extreme religiosity is an individual's personal business,  but when people start forcing their religious obsessions on the general public, I find that I object.  A lot.

Today, I had an appointment with a new eye doctor.  In his waiting room there was only one choice of reading material: the Bible.  I've been noticing Bibles in business settings a lot lately - in dentist and orthodontist offices,  too - so I wasn't surprised to see one there. It was the absence of any other type of reading material at all that seemed a little weird.  Not to mention that it seemed rather pointed.  I suppose there are people who like to read Bible verses while waiting for an eye exam or a teeth cleaning.  I've never given it much thought before,  but I felt like I was being forced to think about it today.

In the examining room, there was not only another Bible but a plaque on the wall:

'The only life worth counting is eternal life'

Hmm.  There were framed Bible verses placed all over the room and on the desktop (presumably to inspire the ophthalmologist and get him through his day - certainly they could not have been put there to proselytize a captive audience patients!).  I was feeling a little queasy, too, because he spent a little too long leaning in a little too close for the most...ahem... thorough eye exam I have ever had in my life.  Very creepy.  I'll never go back there.  Obviously.  But WTF?  Proselytizing at the eye doctor?

Next, I went for gas.   I was at a self-serve gas station, minding my own business, when out of the loudspeaker bleated a simpering female voice crying about what the Bible had told her.  And oh that Bible told her how wretched and unworthy she is - over and over again.  And so she had to share the "good news" with the rest of the world that we are all wretched, filthy sinners.  I'm never going back there again,  either,  obviously.  WTF?  Proselytizing at a gas station?

Then at our closest grocery store,  a tape of what sounded like some sort of religious terrorist music was playing.   Can't a person even pick up milk and eggs without having this creepy imitation of rock music assaulting her ears?  I had first noticed their strangely militant music a while ago.  It goes something like this:  "We are all going to be raptured while "they" -  that would be the rest of the World, you and me, aka the legions of Satan's minions - "are all going to burn in hell! Yay!" <- not verbatim, but true to the general gist of the lyrics.

I wanted to switch grocers,  but they are so darn close when I just need a gallon of milk!  After today's malevolent musical message,  though,  I think it is time to take a stand.  I am going to write to the parent company, Kroger.  I just don't believe that they would be OK with this sort of unprofessional nonsense in one of their stores.  I shopped at Kroger for years in another city and never heard any of this canned creepy crappy Christian "rock" music there.  So WTF?  Proselytizing at the supermarket?

Finally, I went home and picked up the mail.  There was a bill from a contractor who did a small job for us earlier this week.  The bill, which looked normal enough on the front, was sealed with a shiny sticker and a Bible verse.  Inside,  embedded within the list of services provided was a lengthy evangelical diatribe.  I kid you not!  I could not believe the sneaky approach!  I am not sure if they wanted people to notice the religious blurb or not.  Maybe they thought the message would subliminally crawl into their customers' hearts and minds.  Whatever the purpose of that baffling nonsense, it was inappropriate on a business invoice.  Needless to say I will pay that bill and never call them again.  But seriously, WTF?  Proselytizing on a bill?

Why do we,  as a society,  put up with this?  We would never let this type of unhealthy obsession about anything else be inserted so insistently into the public sphere.  Yet we give people claiming "faith" a free pass to not only obsess to the point that they seemingly cannot do anything without first invoking their religion, but to barrage the rest of us with their obsession, too.

It seems to me that what I knew as "religion" and "faith" has been subverted by a self-serving, obsessive religiosity.  I think it is almost a kind of mania.  People don’t try to love one another anymore,  they love themselves,  priding themselves on their "personal relationship" with the invisible Christ and foisting that one-sided "relationship" onto everyone else with constant public displays of obsession.

They obsess about Jesus and God, not like reasonable, thoughtful adults but like lovesick adolescents.  There is a creepy sexual undertone to the Evangelical Christian teen outreach which is evident in the strangely sensual imagery in the lyrics of "Christian rock" music and the frankly orgiastic overtone of their revivals and camps. 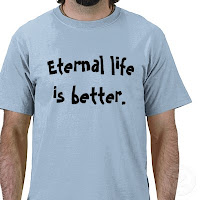 You can’t fail at life if this life doesn’t count.    I think that large numbers of people suffering from the displacement of their focus from the present reality to an imagined, fervently hoped-for future existence beyond the grave is a very dangerous and frightening concept.  I think it is sometimes called the Christian worldview.  The shifted reality gives them, at the very least,  a license to duck out of responsibility in this life.  At worst, it could be something very much more sinister.

This is the nub of the issue for me.  At best, people are wasting away this wonderful life they’ve been given (by gods, by nature, by whatever you believe in) obsessing over the ineffable and yearning towards death to bring about the imagined perfection of an afterlife.  Most make little effort to love their fellow humans,  because there is little reason to do so.  Some talk the talk, but few walk the walk.  It is "faith", not "good works" which matters, after all.  Devout Christian fundamentalists can (and often do) trample all over their fellow humans because nothing but their eternal soul matters - and their souls are unaffected by what they do, or fail to do, on this earth. The potential for religiously-justified cruelty toward others - not to mention the nauseating narcissism - is immense.  We've already seen religiously-motivated bullying and discrimination growing over the past decade.

There is a lot to think about and write about on this topic.  Writing about some of the seemingly innocuous ways that this brand of fundamentalism is being injected more and more into everyday life is one way I hope to get a conversation started about how this intense religiosity might be affecting our society.  This is the first in what I expect will be a series of posts on the subject.  I think the next one will probably be about the possible link between the almost carnal "love" for Jesus in the "Christian rock" genre and the unhealthily sublimated sexual urges of young Christians.
Posted by NiftyWriter at 7:21 PM