It's Time For Marriage Equality

The Supreme Court of the United States is hearing arguments today and tomorrow which could have a decisive impact upon federal law regarding marriage equality. I'm traveling this week, so I'll drop off a roundup of good articles on the topic. This post will be updated later today.

Will we move into the future guided by ancient religious texts or current scientific ones? Will we follow the dictates of supposed deities or the prescript of universal dignity?
This is not to begrudge anyone their faith — whatever gets you through the night, brothers and sisters. Rather, it is to say that you should be free to have your faith govern your life but not to extend it to the governance of others’ lives.
I strongly believe in the sovereignty of self — the idea that you are the sole dictate of your own body and your own life as long as no one else is unwittingly or willingly negatively influenced by your choices.


The last, worst argument against gay marriage, Alex Pareene, Salon, March 26, 2013.
In other words, gay marriage is banned because the purpose of marriage, and the reason the state has an interest in involving itself with marriage, is to help ensure that as many children as possible are raised by their biological parents...But if the argument is that we have to go back to the day when marriage was effectively something society forced couples to do in order to make sure their children had stable homes, that argument should be made more plainly. Don’t just protect Traditional Marriage, Supreme Court: Ban divorce!

Gay Marriage Arguments: Cell Phones, The Internet and Fertility After 55, Liz Halloran, NPR It's All Politics, March 26, 2013.
The U.S. Supreme Court heard lively arguments Tuesday in a challenge to California's Proposition 8 ban on same-sex marriages.
And, as many learned painfully after last year's court decision to uphold Obamacare, it is risky business to predict how justices will rule later based on questions raised in arguments.
So we won't.
Instead, here are five areas of discussion we found interesting, even if they may not prove predictive of the outcome. 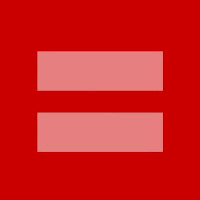 You might have woken up this morning to find your Facebook or Twitter news feed covered in a pink and red equal sign and been curious as to the image's origin. Well, here are the details...

A Decision That Could Change America, Bill Mears and Michael Pearson, CNN, March 26, 2013.
As partisans argued pointedly over same-sex marriage outside the U.S. Supreme Court on Tuesday, justices inside hinted at their disparate views on the hot-button issue -- with some of them questioning whether they should consider the case at all.
What's at stake, potentially, is whether the court extends a sweeping constitutional right for gays and lesbians to wed in all 50 states...

At Supreme Court, Marriage Equality Foes' Best Argument Is That They're Losing, Adam Serwer, Mother Jones, March 26, 2013.
Perhaps mindful of history, the conservative justices mostly argued that marriage was really old and shouldn't be messed with. Same-sex marriage is younger than "cell phones or the Internet," Justice Samuel Alito noted. Chief Justice John Roberts worried about change to an "institution that's been around since time immemorial." Later, Roberts suggested that since children of same-sex couples are doing okay there's no need to recognize their parents' relationships as marriages—an obvious catch-22, since if research showed children in families headed by same-sex partners doing poorly opponents of same-sex marriage would use that research to argue against allowing same-sex couples to marry. 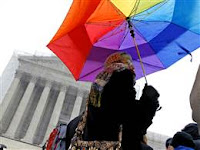 Marriage Equality vs. Supreme Court: Our View, The Editorial Board, USA Today, March 26, 2013.
When the court issues its rulings, likely in June, the best outcome would be a guarantee of equal rights that leaves room for states to decide the means.
If that's not possible, public opinion and civil rights history both suggest the court's choice could be less whether to endorse gay marriage than when and how.

The Weight of History: Marriage Equality at the Supreme Court, John Becker, Huffington Post, March 26, 2013.
No one knows for certain how the arguments today or tomorrow will go, nor do we know how the Supreme Court will rule in June. But we do know that the day will soon come when LGBT individuals, couples, and families are equally protected under the law. We know it won't be long until we are fully and wholly included in the lofty American ideals of liberty and justice for all. And we know that we will win this fight.
The full weight of our history has come to bear today, and I know it will ultimately tip the scales toward justice, toward love.