Beatriz Is Still In Danger 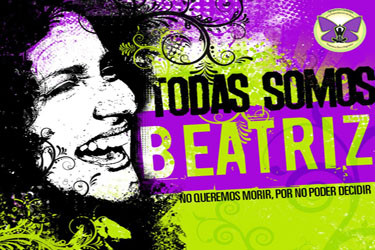 Yesterday in El Salvador, after months of life-threatening delay, a seriously ill young woman was finally delivered of a non-viable fetus by cesarean section.  Beatriz's fetus was diagnosed with anencephaly early in the pregnancy and could not survive. The baby died within hours of its delivery, as expected.

For many people who have been watching this story, there was a collective sigh of relief; Beatriz's life has been saved!  Over here at NiftyIdeas I am relieved, yes, that one part of this woman's horror story has come to an end, but I am angry because the story does not end there.

One woman in El Salvador was forced to pay the price of a government bowing to political pressure and ruling that all of its citizens must obey the dictates of religious conservatives.

One woman in El Salvador is a symbol for millions of women all over the world who have suffered a similar fate - or worse - and the millions more who will continue to suffer from state-sanctioned reproductive slavery and even murder.

Because she was a pregnant woman, Beatriz was denied a basic human right: the right not to have any part of her body - or her whole body - forcibly used by the state to serve the needs of another human being. That is a form of slavery. No man can legally be forced to give up control of his organs or blood to keep another human being alive - not even if that other human being is his own innocent child. Even non-pregnant women are usually permitted to protect their own bodily autonomy in the same way. The ideology called "sanctity of human life" which urges states to force pregnant women into giving up bodily autonomy no matter what the risk to themselves disappears in a puff of smoke once a fetus emerges from a womb as a living baby. Then, it can go to the devil as far as "pro-lifers" are concerned. They fight to deny babies life-saving health care, food and education after birth equally as hard as they fight to force their mothers into giving birth in the first place. 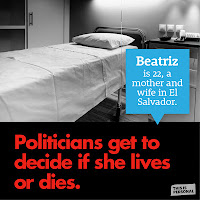 The cesarean section that Beatriz underwent yesterday was not a satisfying conclusion to a dramatic political and religious fight. The sighs of relief are premature and misplaced. Except for the long-overdue ending of her doomed pregnancy, Beatriz has suffered as horribly as it was possible to suffer because of her country's sick theocratic laws and she is still not out of danger. Beatriz was at risk for every kind of regular pregnancy injury and she has certainly suffered several. She has almost certainly suffered severe and permanent damage to her health, too and she could very likely have died. She could still die as a direct result of the chain of health repercussions that this forced pregnancy has caused.

Beatriz was forced to endure months of high risk pregnancy as a slave to other peoples' ideological demands. Like every woman who has experienced pregnancy, Beatriz will have lifelong effects to her body and her health due to the stress that even a normal, healthy pregnancy would have had on her body. Unlike most healthy women, however, Beatriz has undoubtedly suffered major repercussions which will negatively impact her health for the rest of her life. Kidney failure is not a minor, easily reversible thing which will magically disappear now that she is no longer pregnant. She may or may not ever recover from that. The triggering of a severe autoimmune disease flare up is not a minor thing which will disappear now that she is no longer pregnant. Autoimmune disorders are like a genie in a bottle - once that cork is popped and the evil genie escapes, the repercussions spiral outward from there; there is no stuffing it back inside the bottle.

Finally, the cesarean section itself was major abdominal surgery involving cutting through the densely muscled abdominal wall, cutting into an organ - the uterus - and removing the fetus. It should always be the last resort in normal healthy women because the risk of harm to the woman is so high. Beatriz should never have been forced to endure a doomed pregnancy for so long that her only medical option in the end was to face even more risk to her health and life by undergoing a major surgical procedure.  It was unnecessary for Beatriz to have ever been forced into that situation, and I contend that it was criminal for her government - and the theocrats who control her government - to have persistently harmed her in this way.

The risks of pregnancy have been minimized and dismissed by proponents of forced birth, to the point where the general population is almost completely ignorant of facts. The average man on the street actually believes that because it is both "natural" and commonplace, pregnancy is no big deal - that it has only trivial deleterious effects on a woman's life and health - and that labor and vaginal birth or even cesarean section are likewise no big deal, either. Pregnancy is indeed, "natural" - as are many biological functions which may exact a very high cost on the functioning organism - but it is by no means a trivial matter.

Every pregnancy causes lifelong negative changes in a woman's body. No mother escapes that. These range from the universally-experienced, relatively benign, but still psychologically painful (stretch marks, loss of youthful tone in the body) to the frequently-experienced, moderately serious and both physically and psychologically devastating (permanent loss of bladder control; vaginal and perineum tearing resulting in permanent scarring, damage and pain; damage to the abdominal wall resulting in lifelong weakness and risk of hernia) to the rare, but significant number who suffer serious pregnancy harm (massive blood loss and organ failure causing lengthy and incomplete recovery; months of debilitating pregnancy complications requiring expensive, bankrupting medical care; loss of ability to work and earn a living or care for other children; loss of life).

Statistics for these harms are difficult to pin down because the popular narrative discourages reporting of pregnancy-related harm, and in fact many pregnancy or childbirth-related injuries and deaths are recorded as caused by whatever secondary cause stemming from the pregnancy actually killed the woman. In other words, if a woman's organs shut down due to massive blood loss in delivery, her death might be recorded as " catastrophic organ failure" and never be factored into any statistical analysis pointing to risks of pregnancy and delivery. Further, hospitals in most places are not required to report maternal injury or death statistics as a separate database.

These flaws in reporting help to conceal the extent of the risk that women take on when pregnant and it helps to perpetuate the false narrative that pregnancy is a natural, easy "choice" which is always better for a woman as well as an embryo. In fact, pregnancy is never objectively better for a woman than either abortion or never conceiving in the first place. It is much worse for her in every way - physically, psychologically, economically and legally. Obviously, human beings still wish to reproduce and many women wish to become mothers so they voluntarily risk these hardships. The problem is when society compels them to undertake these risks.

When a pregnancy is voluntary, most women willingly take on the health risks even when they are properly informed about the potential seriousness of those risks because they choose to be pregnant. Often however women are not informed of the risks of pregnancy because the narrative has been controlled by anti-choice activists who promote the minimization of pregnancy risks and dismissal of the huge impact pregnancy makes on a woman's life. Because of deliberate miseducation, many women voluntarily become pregnant without understanding the full range of risks they are taking, and if the pregnancy later causes or uncovers a serious health issue, these women are put into a horrific quandary. Furthermore, whether women understand the risks or not, their ability to choose whether or not to take on the risks of pregnancy is being more and more reduced, even in so-called "progressive" countries where constitutionally-protected abortion rights still exist at least in theory.

Beatriz will never be the same again. If she survives the surgery and its aftermath, she will still endure a lifetime of severely diminished health and strength as a direct result of the actions of the Salvadoran state. She was forcibly harmed by the Salvadoran state, through its religiously-mandated laws and its theocratically-controlled government. I'm going down on record to say that the fact that this can still happen to any woman in the 21st century is an outrageous affront to human morality and a terrifying miscarriage of justice.

As the Republican party - representing the extreme religious right wing of society - continues to push anti-choice legislation through state legislatures and Congress, the safety and human rights of women
even in the USA is in jeopardy. Access to safe legal abortion might be denied to women in a modern, democratic country is no longer guaranteed. In fact, in many states it is nearly impossible for a woman who needs an abortion to get the health care she needs and in most other states, it is increasingly difficult. What happened to Beatriz and Savita is already happening here, and has been happening for years. One reason why the stories are not publicized is because of false reporting of the causes of injury or death as noted above. But it is the implacable resistance in society to the notion that pregnancy might pose dangers to women which fuels willful blindness. In the USA and Canada, people don't know that many women every year are denied the healthcare they need, because they do not want to know.

Women are at risk of reproductive slavery and medical malpractice all over the world including in the "progressive" west. Instead of prioritizing women's health, increasing access to effective contraception for every woman and abortion services for women who need them, societies romanticize pregnancy and childbirth, fight against comprehensive sexual education for young people, limit access to healthcare, force pregnancy and childbirth and then saddle women with all of the physical and economic costs of involuntary parenthood. Men and women who value justice and human rights ought to be paying attention. Tomorrow we may be reading about a Beatriz or Savita in our own hometowns. 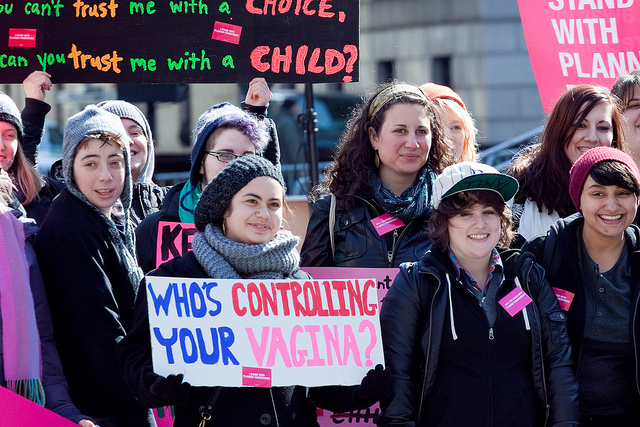 Posted by NiftyWriter at 4:24 PM