Today, we celebrate the life and achievements of Dr. Martin Luther King, Jr.

Martin Luther King Jr. was born in Atlanta Georgia on January 15, 1929, the son and grandson of Baptist ministers. In spite of school segregation, he was a good student, graduated from Morehouse College like his father and grandfather before him and went on to study for the ministry at Crozer Theological Seminary, where he distinguished himself as a leader (winning election as president of the predominantly white class). After receiving his Bachelor of Divinity from Crozer, he was awarded a fellowship and continued on to complete a doctoral program at Boston University, where he earned the title of Dr. Martin Luther King Jr in 1955. In Boston, Dr. King met his wife, the accomplished and intelligent Coretta Scott King with whom he had a family of four children. 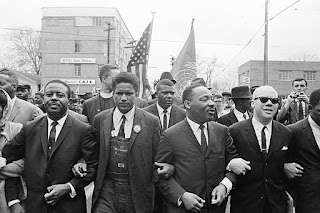 The Kings moved to Montgomery, Alabama, where Dr. King became pastor of the Dexter Street Baptist Church and became active in the NAACP. When Rosa Parks defied the segregationist Jim Crow laws by refusing to give up her seat on a bus to a white man, Dr. King led the year-long bus boycott which led to the eventual Supreme Court ruling that the laws requiring segregation on buses were unconstitutional. The Civil Rights Movement had arrived at its moment in history at last and Dr. Martin Luther King Jr had emerged as its leader.

In spite of his determination to lead a peaceful revolution for civil rights, Dr. King was the target of unceasing attacks during his years in the public eye. He was arrested more than twenty times, was assaulted numerous times and was under constant threats of violence and verbal attacks. During the bus boycott, his house was bombed as those who resisted equal rights for people of color demonstrated their utter lack of respect for the lives of Dr. King and his wife and children. In spite of these terrible dangers, Dr. King persisted in the march toward justice, with the blessing and support of his wife and family.

Dr. King was the right leader for the right time as a movement that had been simmering - a yearning for the true liberty and dignity of full equality - finally came to a boil. Marrying his interpretation of Christian theology with the peaceful protest methods of Mahatma Ghandi, Dr. King's ideal truly represented a revolutionary new way of bringing about peaceful social change which he believed could strengthen, not unravel, the fabric of society. In 1964, at only age 35, he was recognized for his courageous and enlightened leadership with the Nobel Peace Prize. He donated the more than $50,000 prize award to the Civil Rights cause. 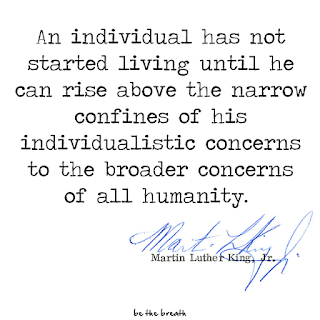 In early April, 1968, Dr. King was in Memphis to lend moral support to black workers who were striking to protest the egregious inequities of their treatment and compensation compared to white workers. King's arrival in Memphis had been delayed because of a bomb threat to his plane but he managed to get there, march with the sanitation workers and speak at rallies.  On the last night of his life, at a rally at the Mason Temple in Memphis, he referred to the intimidation and threats of violence that had dogged him for years. In what became known as his "I've Been to the Mountaintop" speech, King had this to say to his listeners:

"And then I got to Memphis. And some began to say the threats, or talk about the threats that were out. What would happen to me from some of our sick white brothers? Well, I don't know what will happen now. We've got some difficult days ahead. But it doesn't matter with me now. Because I've been to the mountaintop. And I don't mind. Like anybody, I would like to live a long life. Longevity has its place. But I'm not concerned about that now. I just want to do God's will. And He's allowed me to go up to the mountain. And I've looked over. And I've seen the promised land. I may not get there with you. But I want you to know tonight, that we, as a people, will get to the promised land. So I'm happy, tonight. I'm not worried about anything. I'm not fearing any man. Mine eyes have seen the glory of the coming of the Lord."

Martin Luther King, Jr. was brutally taken from this world on April 4, 1968, in Memphis Tennessee. He was shot to death by a white supremacist sniper as he stood on the balcony of the Lorraine Hotel.

You can find an excellent, brief (4 minutes) biography of Dr. King here.

I say to you today, my friends, so even though we face the difficulties of today and tomorrow, I still have a dream. It is a dream deeply rooted in the American dream.

I have a dream that one day this nation will rise up and live out the true meaning of its creed: 'We hold these truths to be self-evident: that all men are created equal.' 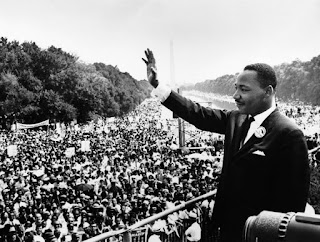 I have a dream that my four little children will one day live in a nation where they will not be judged by the color of their skin but by the content of their character.

I have a dream today.

I have a dream that one day, down in Alabama, with its vicious racists, with its governor having his lips dripping with the words of interposition and nullification; one day right there in Alabama, little black boys and black girls will be able to join hands with little white boys and white girls as sisters and brothers.