Just in case anyone is still clinging to the false notion that aggressive Christianity is a non-issue in countries other than the Jesus-soaked USA, consider a recent situation in Japan.

A lesbian couple approached the Tokyo Disneyland to request permission to hold a ceremony to mark their union as a couple. Japan does not allow same-sex marriage, so it could only be an unofficial "wedding".  Happily, Tokyo Disney agreed to the request. Chalk one up for Tokyo Disney!  However, the couple were barred from exchanging any vows because of "Christian teachings". Wait, what? Christian teachings? Wasn't there a lot of talk recently about how religion for the Japanese, if they had any at all, was some form of vague, spiritual Shintoism? What is that I hear people saying about Japan's enviable secular society? No, it's not. (Cue the "but this is an isolated incident" prevarication).

Anyway, after a brief kerfuffle over "an employee's" dictate that the ceremony must have one participant dressed in groom attire and one dressed in bride attire so as not to "offend" park visitors (an outcry on Twitter and other social media brought about a hasty retraction from Disney, thankfully), the theme park seems to have embraced a position of acceptance, setting the stage for future ceremonies so that same-sex couples can celebrate their union there with family and friends. Considering the cultural pressure against it - not to mention the powerful worldwide Christian lobby - my hat is off to Tokyo Disney for doing the right thing.

In the larger Japanese society, however, same-sex marriage continues to be the same thorny subject that it is in the USA:

"There needs to be more pressure for legal unions between gay people in Japan," said Taiga Ishikawa, one of only a handful of openly gay politicians in the country. "This is only a guess, but I'd say there are more people now who are in long-term relationships and want that to be recognized in the form of a civil partnership."

And of course, there are the usual homophobic and hateful tropes raised by prominent public figures equating marriage between two loving human beings to bestiality, pedophilia and general immorality. In this case, a film celebrity:

Commenting on TV on President Barack Obama's recent declaration of support for gay marriages in the US, the film director and comedian Takeshi Kitano told a fellow guest: "Obama supports gay marriage. You would support marriage between humanoid and animals eventually, then," before questioning the ability of gay couples to raise children.

These vicious and hateful slurs questioning the humanity and morality of GLBT people are one of the most repugnant weapons that Christians use in their bigoted campaign to marginalize and oppress. The "slippery slope" trope is particularly ironic coming from a group constantly balancing on the edge of a slimy slope of their own.  David Barton, Christian apologist and professional liar demonstrates (If you prefer text, read this transcript of a right-wing radio talk show interview with Barton for an even clearer insight into the way these people think, and to understand what they would gladly do once they have the power to do it):


"I don't care what the Supreme Court says". Yes, that's right. He is saying that Christians are above the law.

Christians are adamant in their "righteous" zeal and open about their intention to force everyone in this country to submit to Biblical law and, in due course, to force every country in the world to convert and/or submit to the brand of Christianity that they are aggressively spreading via the modern Christian "missions" movement. Anderson Cooper's interview (CNN) of a defender of the pastor whose horrific anti-gay rant I linked here underlines just where that slimy slope would dump us.

Christians want the US Constitution subordinated to or replaced by "Yahweh's Law". They are proud about this - don't forget: they truly believe that they are doing what is best for all of us, even if they have to lie, cheat and trick the rest of us to achieve their goal - and they are actively, tirelessly working to bring it about. This Christian version of sharia would reduce women to the status of domestic animals or chattel, would criminalize inborn human sexual orientations and would demand the death penalty for dozens of offenses which our modern morality recognizes are not only not capital offenses but in many cases are not offenses at all. But true Bible-believers honestly believe that is what God wants for us, though we may not understand and resist. Just as they see indoctrinating children with fear of hell before children are old enough to defend themselves against the often permanent psychological impact, they see it as their job to lead those who disagree with them out of "sin" by forcing their religious belief system on them "for their own good".

So, following the logic of Christian antagonists - who hate and revile GLBT people so much they call for their punishment, persecution and even deaths - we should take a closer look at their proposed "improvements" of current laws; laws agreed upon by elected human beings to whom they already believe they are not answerable.  Citizens who value the rule of law which protects our secular society for all citizens need to pay attention to what these Christians say and believe. They believe that their god's law supercedes the rule of civil law - including the Constitution of the United States and the Constitutions of all countries. When pressed on the question of who gets to say what "god's law" actually is, Christians point to the Bible as the final and inerrant authority.

This reality, following the Christians' own logic, begs the question of just where following "Yahweh's Law" will lead us. Conservative Christians have already succeeded in gaining enough power to roll back secular law to deprive women of most of their hard-won reproductive and equal pay rights. Christians have succeeded in denying GLBT people of the right to marry, their right to protection from bullying and a host of other forms of discrimination. Christians have succeeded in circumventing the legal separation of church and state in so many ways that their religion, their calendar and their privileges have become ubiquitous in the culture, and their power continues to grow. 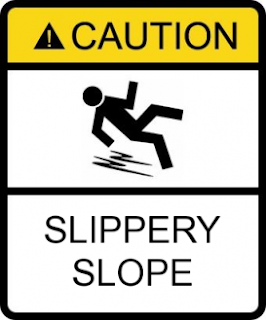 If and when they succeed in changing enough laws that their continued power is assured, what then will stop Christians from imposing every jot and tittle of the Biblical laws upon all people? They already treat women and LGBT people as less than fully human. How soon before they will return us to the Biblical days of stonings for adultery and theft?  Forget "training up a child"; the Bible is clear that a rebellious child must be stoned to death.  What will stop the Christian majority from imposing these and similarly horrific laws on us?

"I tell you the truth, until heaven and earth disappear, not the smallest letter, not the least stroke of a pen, will by any means disappear from the Law until everything is accomplished." Matthew:5:18 (NIV)

Christians insist that the Bible is literally, unerringly the word of God.  Those of us who have been avoiding the issue - telling ourselves that Christians just mean some of the Bible is to be followed to the letter, or only the New Testament or only the "red text" of Jesus' words - need to start paying closer attention. There is no way around the fact that the entire Bible is sacred truth to Christians and, in the New Testament, Jesus himself affirmed that the Mosaic laws must not be discarded.

Any doubts people might have about the determination of Christians to enshrine Biblical "truth" into this culture while they push out secular knowledge which threatens their religious beliefs - or threatens the justification of Biblical foundations for their ascension to authoritarian power - must be dispelled. This belief in absolute Biblical "truth" is the foundation of their efforts to force educators to teach Biblical creationism as science. This determination is the source of their push to deny global climate change. It is the impetus behind their efforts to undermine scientific research, to defund public education and to gut the public social safety net.

The Christian accusations against GLBT people have no foundation in fact, unlike my concerns about the slippery slope from Christian influence on secular laws to a return to the brutality and conservatism of a Bible-based legal structure.  There is ample evidence which unequivocally proves that the homophobic Christian hypotheses about the people they hate and fear are false, while there is no evidence that Christians would not persecute non-Christians, LGBTs and women should they gain enough power to do so, and plenty of evidence that they have begun to do exactly that. Indeed, we have a long history that shows just how viciously oppressive, immoral and evil unfettered Christian power can be.

Here is the true slippery slope: If Christians manage to impose any more "Bible-based" law onto the citizens of the United States (and in Canada, and in the UK, and in continental Europe, and in Australia, and in ...), it will only be a matter of time before women lose what remaining human rights they have not yet lost to religious conservatism (including the right to vote), children will be abused and even killed if they do not conform to Biblical strictures, and our dreams of a secular, free and open society of peaceful coexistence will be shattered for generations to come.

It has happened before. I hope we are wise enough to recognise that it could happen again, if we do not take steps to defend our freedom from religion. 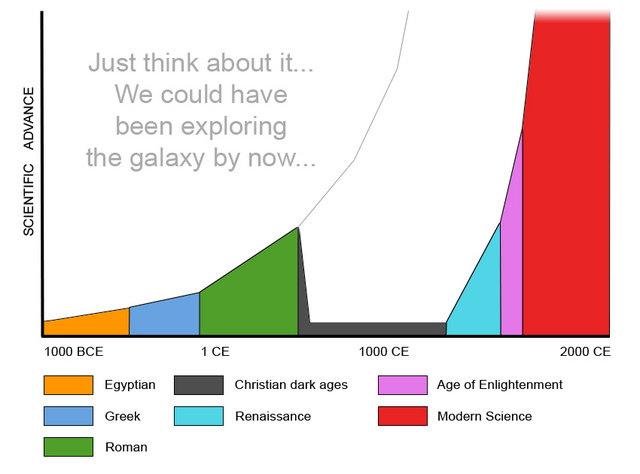